Home Blog list page Mads Mikkelsen: celebrating the best movies from the star of Another Round

Mads Mikkelsen: celebrating the best movies from the star of Another Round

Oscar-winning Danish drama Another Round, on release now in Cineworld, features a powerhouse performance from actor Mads Mikkelsen (soon to be playing the new Gellert Grindelwald, as well as the villain in Indiana Jones 5). He plays Martin, a dissatisfied, discontented schoolteacher who joins forces with a group of friends to take part in a drinking experiment. The aim is for each of the men to increase their daily blood alcohol intake to 0.5%, which, theoretically, is the optimum level for boosting happiness and productivity.

Initially, Martin sees the benefits of the test, including a renewed bond with his students and a resurgence in the relationship with his wife, but it doesn't take long before dependency on the demon drink takes hold, forcing the men to question the value of their own lives.

The movie is directed by Danish filmmaker Thomas Vinterburg who helped initiate the Dogme 95 manifesto encouraging a commitment to cinematic realism (handheld cameras, no artificial music, all shot in natural light). Centrally, Another Round is held together by Mikkelsen's poignant, BAFTA-nominated performance as a man assessing the all-important crossroads point in his life between young and old.

We wanted to celebrate Mikkelsen's versatility with a look back at his best films. Scroll down to discover our list.

Before he became a fixture in Hollywood, Mikkelsen was a semi-regular collaborator with Danish provocateur Nicolas Windig Refn (later to score a Hollywood hit of his own with 2011's Drive). In the gritty and grimly compulsive Pusher trilogy, Mikkelsen makes an impact as low-level drug dealer Tommy whose stark and desperate lifestyle casts a startling new light on the otherwise tourist-friendly city of Copenhagen. It was Mikkelsen's film debut and was an outlier of his skill with seedy, creepy characters, traits that would flourish in his later big-budget movies.

This Danish drama features another memorable performance from Mikkelsen, here portraying a manager of an Indian orphanage who is forced to reckon with shocking family secrets. Mikkelsen's somewhat inscrutable and morose presence challenges our notions of sympathy as his character Jacob vacillates between two very different worlds: bustling Bombay and the relatively more ordered environment of Copenhagen. The film, directed by Susanne Bier, was a huge success in Denmark and was Oscar nominated for Best Intenational Feature Film.

Mikkelsen erupted onto the Hollywood scene with his eye-catching role as the calculating terrorist financier Le Chiffre, sworn antagonist of James Bond (Daniel Craig, making his terrific 007 debut). So many Bond movies have been defined by chin-stroking baddies with thoughts of world domination, but Mikkelsen's ability to keep things internalised ensures that Le Chiffre is a creepy, somewhat unreadable presence. This is entirely appropriate for a plot in which hero and villain are largely locked in conflict over a poker table, although Le Chiffre's willingness to get his hands dirty in that rope-swinging torture sequence had every man in the audience crossing his legs.

Mikkelsen doesn't just play villains and/or morally compromised individuals. He's also got a knack with portrayals of real-life icons, as this biographical drama demonstrates. The movie imagines a love affair between the famed classical composer Igor Stravinsky (Mikkelsen) and French fashion designer Coco Chanel (Anna Mouglalis) and, as one would imagine, is drenched in style. In fact, Chanel threw its full support behind the movie, granting the production access to the company archives as well as Coco Chanel's former apartment in Paris.

A forbidden love affair clashes with the wishes of the Danish Royal Family in this riveting and powerful costume drama, inspired by true events. Mikkelsen plays doomed 18th century Royal Court physician Johann Friedrich Struensee who makes the mistake of falling for the Danish King's wife, Caroline Matilda of Great Britain (a breakout role for Alicia Vikander). The movie shows a graceful ability to balance the personal and the political as it inexorably moves towards a climax that we know can't be a happy one. For an actor who so often plays gloomy characters, A Royal Affair showcases Mikkelsen at his most empathetic.

Mikkelsen's previous collaboration with Thomas Vinterburg is a deeply unsettling, forensic examination of human behaviour. The actor plays a widowed kindergarten teacher who is much-loved by his local Danish community – until one of his young pupils utters something that causes all of the local parents to suspiciously close ranks. More than that, a sense of cruel, often violent, pack mentality takes over, driving Mikkelsen's character to the ragged edge as the situation snowballs. What is truth, and what is a lie? The film, disturbingly, never answers that question, but demonstrates how quickly people will resort to base instincts to secure the preservation of themselves and their children.

Notorious serial killer Hannibal Lecter has famously been embodied by the likes of Brian Cox and Anthony Hopkins (the latter having won an Oscar for The Silence of the Lambs). It says something about Mikkelsen's talents that he was able to fashion a completely different interpretation in Bryan Fuller's critically acclaimed, and prematurely cancelled, horror-thriller series, which largely focuses on the cannibalistic Lecter's mind games with FBI agent Will Graham (Hugh Dancy). Mikkelsen gives us a Lecter who is immaculately tailored and mannered, and used to the finer things in life, which only serves to make him more terrifying. The actor described him as a "fallen angel.. Satan on Earth", and it's certainly a description that fits.

Was Mikkelsen underused in this Marvel Cinematic Universe (MCU) adventure? Quite possibly, but he's such a strong presence that he's able to maximise those relatively few minutes of screentime. He glowers and growls as the evil Kaecilius, the portal-shifting bad guy locked in battle with sorcerer supreme Stephen Strange (Benedict Cumberbatch, making his entertaining MCU debut). In truth, the Doctor Strange movie is more driven by visually arresting set-pieces than intellectually stimulating bad guys (The Dark Knight, this isn't), but Mikkelsen is always a welcome presence.

A mere two months after the release of Doctor Strange, Mikkelsen pivoted to the side of the good guys in Rogue One, quite possibly the best of the recent batch of Star Wars films. Director Gareth Edwards (plus director Tony Gilroy, who reshot the final act) brings an appreciably gritty tone to the story of the Rebel squadron who stole the plans for the first Death Star; it's essentially The Dirty Dozen in space, and the movie does an excellent job reinforcing how the might of the Empire is stacked against our band of heroes. Mikkelsen is atypically sympathetic as Death Star designer Galen Erso, who extends an all-important message to his estranged, rebellious daughter Jyn (Felicity Jones) that sets in motion a thrilling story of David vs Goliath pluck.

It takes a special actor to hold the screen all on their own, but Mikkelsen is up to the challenge. In this wind-blasted, atmospheric survival drama, he plays a man whose sole task is to make it across the Arctic tundra alive, and in one piece. Mikkelsen's intensely visceral performance makes us feel the cold in our bones, and his subtle body language intriguingly alludes to the life that he has left behind. It's not a role of dialogue but of intense physicality (one can't imagine it was fun to make), and Mikkelsen can communicate myriad different emotions without saying a word.

Click here to book your tickets for Another Round and tweet us your favourite Mads Mikkelsen movies @Cineworld. 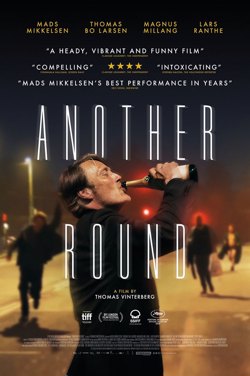 Freaky and 5 other memorable body-swap movies