Freaky and 5 other memorable body-swap movies

This allows for plenty of grisly recriminations and some huge laughs as each actor relishes embodying the other's mannerisms – watching Vaughn complete a high school cheerleading routine is off-the-charts amusing.

But this is what we've come to expect from director Christopher Landon who fused Scream-style slasher horror with Groundhog Day in his two Happy Death Day movies. Freaky has been praised as another successfully spooky release from high-concept masters Blumhouse, the studio behind the likes of Get Out (2017) and the Halloween reboot (2018).

The release of Freaky has got us thinking about the essential body-swap movies. Scroll down to discover our list.

Writer Charlie Kaufman and director Spike Jonze make for a memorably twisted partnership in this cult classic slice of surrealism. John Cusack plays the struggling, down-at-heel puppeteer who discovers a portal into the mind of actor John Malkovich (playing himself). The filmmakers exploit the premise for maximum zaniness but there are sobering philosophical undercurrents too – how much can we truly know ourselves, and what's the nature of our own psychological autonomy? It's a premise that's both funny and ever-so-slightly terrifying, and a game Malkovich clearly relishes the ability to send up his screen image, notably in the famous scene when he portals himself with dizzying results.

The original Freaky Friday from 1976, starring Jodie Foster, is the prototype for all body swap movies. It got a superior remake in 2003 from director Mark Waters (Mean Girls) with Jamie Lee Curtis and Lindsay Lohan starring. The two actors play a mother/daughter combo who end up swapping bodies, a premise that allows for some giddily enjoyable set-pieces. Curtis, in particular, has great fun tapping into her comic abilities, playing a slang-talking, melodramatic teen queen who is appalled to have been transplanted into an older body. Lohan's performance is perhaps a tad more subtle, conveying a sense of mature, adult observation that belies her outward appearance.

Ryan Reynolds and Sir Ben Kingsley are unlikely big-screen collaborators. And the sense of disorientation increases when one attempts to get to grips with the premise of this bonkers thriller. Kingsley plays a terminal billionaire who is determined to prolong his existence by swapping his consciousness into another body. The subject: Reynolds as the guy who has essentially given up his body to cover his daughter's medical bills. Harold Pinter, it ain't, but there's a degree of oddball fun watching the fast-talking Reynolds attempting to simulate the mannerisms of one of the UK's most esteemed classical actors.

This poignant anime was a huge box office success in its native Japan, grossing 25 billion Yen (the equivalent of $224 million in the USA and Canada). Released by Japanese institution Toho (the studio behind the Godzilla franchise), it tells of two teenagers, one located in a big city high school and the other living in the countryside, who, magically, are able to swap into one another's bodies. Living vicariously through each other, they learn about life, love and the universe, the drama playing out against some truly luscious visuals. It proved to be another triumph for director Makoto Shinkai, a veteran anime and manga artist.

When this Jumanji sequel/reboot was announced, there was a fair amount of outcry from those who cherished the 1995 original, starring the late Robin Williams. We needn't have worried – Welcome to the Jungle proved to be a hell of a lot wittier and more imaginative than we dared to imagine. When a group of teens are sucked into Jumanji (upgraded from a board game to a video game), they're substituted with avatars. This is where the magic of the film resides as four disparate actors, Dwayne Johnson, Jack Black, Karen Gillan and Kevin Hart, fashion delightful chemistry with each other. Johnson, in particular, is a riot embodying a scrawny teen who can't believe he's swapped into the oversized muscles of a genuine man-mountain. 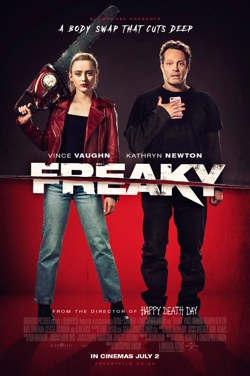