Michael Myers is back in a brand image from horror sequel Halloween Kills. Shared by Total Film (via Games Radar), the iconic serial killer sports his trusty white mask and knife as he prepares to wreak carnage. Halloween Kills picks up the thread of 2018's blockbusting slasher movie Halloween. The latter disregarded years of unnecessary Halloween sequels and reboots, acting as a direct continuation of John Carpenter's 1978 masterpiece. Director David Gordon Green (soon to direct The Exorcist sequel) and co-writer Danny McBride cooked up a storm of nostalgia-pleasing fan references, hardcore gore and an intelligent story that explored the degrading effects of paranoia and terror across three generations.

In fact, the 2018 Halloween movie became the most successful slasher movie of all time, grossing $255 million worldwide. That put it a notch above Wes Craven's 1996 chiller Scream (Scream 5 is due in 2022), and it ranks as the highest-grossing Halloween movie so far. That said, Carpenter's original 1978 film is still far and away the most profitable: one of the most lucrative indie movies of all time, it made 216 times its original budget of $300,000 (so, a $70 million worldwide gross).

Halloween Kills picks up with the traumatised Laurie Strode (Jamie Lee Curtis), the sole survivor of Michael's 1978 massacre. In the 2018 movie, she'd turned her home into an impregnable fortress, ultimately revealing it as a trap into which Michael would be lured. With her daughter Karen (Judy Greer) and granddaughter Allison (Andi Matichak) looking on, Laurie burned the house, and Michael, to the ground. Or did she? The breathing effects during the closing moments made it clear that we weren't done with the masked lunatic.

Green told Total Film: "When we made the last one we wanted to find a way for someone who’s never seen the original to get up to speed with the story. But this one gets right to the action. It’s very aggressive. It’s more efficient. We wanted it to be an explosive middle before things get streamlined and personal again."

Series guru John Carpenter has promised escalating levels of bloodshed in Halloween Kills. He gave his thoughts on the movie when it was assigned a new release date in 2020 (which arose from COVID-19-related delays).

I know you all have been looking forward to an update on the status of "Halloween Kills". Here it is: pic.twitter.com/EWivyipYgR

Halloween Kills is due for release (at the time of writing) on 15th October 2021. It will be followed by threequel Halloween Ends, scheduled for release on 14th October 2022. Can't wait for another spine-tingling reunion with Michael Myers? Let us know @Cineworld. 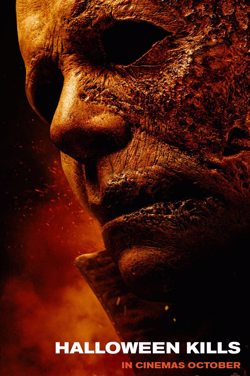