The mercurial Huppert (star of Paul Verhoeven's controversial Elle) plays the eponymous Frankie, a troubled actress who has been diagnosed with a terminal illness. Realizing that she has only a few months left to live, Frankie must reconnect with her estranged family. The stage is set for a drama of recrimination and redemption in the beautiful Portuguese town of Sintra.

The film is directed by Ira Sachs who has previously elicited fine performances from actors including John Lithgow and Alfred Molina (Love is Strange), and Greg Kinnear (Little Men). The script, co-written by Sachs, plays to Huppert's strengths: she plays a somewhat unreadable, aloof character who steadily approaches a life-changing moment of realization. The excellent supporting cast includes Kinnear, Brendan Gleeson (28 Days Later) and Marisa Tomei (Spider-Man: Far From Home).

Click here to book your Cineworld Unlimited tickets for Frankie. The film screens on 23rd May. Let us know @Cineworld and #CineworldUnlimited if you're planning to watch it. 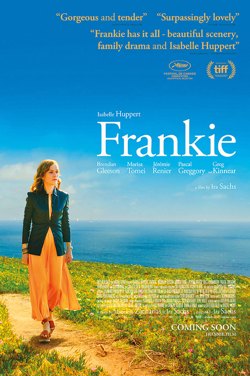