Home Blog list page Wonder Woman 1984: how on Themyscira is Steve Trevor back, and other questions we need answering

Hold on a second? Is that Chris Pine in the cast list? Didn’t his character, Steve Trevor, die in the first Wonder Woman movie? And even if he somehow survived that huge explosion, wouldn’t he be really, really old in 1984? Honestly, it did look like he died, yes, but that is no typo – Steve Trevor really has returned. How he has achieved that miraculous comeback is just one of the questions we need answering in Wonder Woman 1984.

How is Steve Trevor back?

Those who watched the first Wonder Woman won't have forgotten the heroic World War I sacrifice that Steve Trevor made. He saved millions of lives by destroying the superweapon intent on killing the Allies, allowing Diana to put a stop to the God of War Ares’ (David Thewlis) destructive plan.

So, how exactly did Steve survive an explosion that surely no one could walk away from? And how is he the same age as he was back in 1918? Has he been resurrected somehow, perhaps using magic from Diana’s island home Themyscira? Perhaps he isn’t really back and is just a figment of Diana’s imagination? Or maybe he ended up frozen in ice, much like a different soldier named Steve?

In any case, the mysterious return of Steve Trevor is one of the most exciting elements of Wonder Woman 1984. The trailer implies that the nefarious Maxwell Lord gives people everything they desire, which in Diana’s case is the return of long-lost love interest Steve. Perhaps Maxwell will use this power to gain leverage over her?

Will Steve survive the events of the sequel?

Depending on how he has returned, the question remains as to whether Steve Trevor will survive the events of the movie. Assuming some sort of magical intervention, it is highly likely that we will have to endure, once again, a tearful goodbye between Steve and Diana.

What is Maxwell Lord’s masterplan?

Clearly, Pedro Pascal’s villain is the manipulative big bad behind it all, but what exactly is the grand plan of this eighties infomercial king? He promises prospective clients that they can have anything they desire, and, this being a comic book movie, there is no doubt some nefarious scheme behind it all, but what is it exactly? Some sort of Faustian bargain seems likely, but to what end?

Maxwell Lord is a legendary DC villain, so no doubt he has much evil-doing in mind, but we will have to wait and see exactly what it is he wants to achieve. In the trailer, it seems that Maxwell extends his influence through that most 1980s of devices, the TV set, allowing him to invade millions of homes and seduce people to his cause. This would be a neat way of reinforcing both the film's context and the threatening nature of its central bad guy.

Will we see Cheetah in her final form?

In the pages of the comics, Wonder Woman’s arch enemy Cheetah, who begins life as archaeologist Barbara Minerva, looks more like a Thundercat than she does Kristen Wiig. In fact, all we’ve seen in the trailers is Wiig in 1980s get-up, but she remains human-looking throughout. Will we get to see her in full-on cat mode by the movie’s end? If so, here’s hoping they adapt the look purr-fectly for the big screen.

What is the mysterious crystal that Maxwell Lord possesses?

We have so far only seen glimpses of the peculiar crystal that is in Maxwell Lord’s possession, but it is clear that it is of much importance to him. So, what exactly is this magical item that means so much?

Well, it is very possible that it is something from DC comic book lore called a Chaos Shard, with many fans believing that this is what gives Lord his telepathic abilities. Chaos Shards also have the power to grant wishes, which could be how Lord is carrying out his promise of giving people whatever they want. This could also explain how Steve Trevor is able to return…

Wonder Woman 1984 is released on the 5th of June. How do you think Steve Trevor has returned? Tweet us your theories @Cineworld. 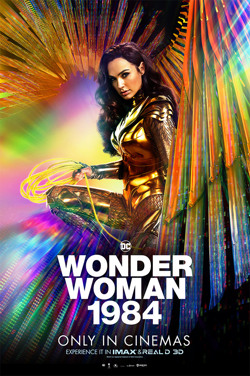