Tom Hardy and the Venom franchise go together like... well, a hapless human host and a ravenous, squishy symbiote. You can now book your Cineworld tickets for the next round of Hardy madness in Venom: Let There Be Carnage, the follow-up to the 2018 comic book blockbuster. Will there be a tank full of lobsters this time?

We'll find out in due course. For the time being, Hardy's character Eddie Brock and his accompanying symbiotic 'friend' Venom must do battle with the deranged Cletus Kasady (Woody Harrelson). Newly sprung from prison, Kasady turns himself into a deadlier equivalent of Venom, named Carnage, forcing Eddie into action.

Hardy says of Serkis: "He's worked with Peter Jackson on second unit to deliver huge pieces, so it's not out of his wheelhouse. Then as an artist, as a friend, there's a connection there of trying to do something which is epic and complicated and complex. It's great to have somebody there leading it who I know I have a trust as an artist. He has the ability to deliver."

Venom: Let There Be Carnage is the latest chapter in Sony's Spider-Man Universe (SSMU), which is adjacent to the Marvel Cinematic Universe (MCU). The SSMU will expand with next year's Morbius, starring Jared Leto, although the big question is this: will Tom Holland's Spider-Man appear in the Venom sequel? You'll have to watch it to find out.

Click here to book your tickets for Venom: Let There Be Carnage, which is released in Cineworld cinemas on 15th October. 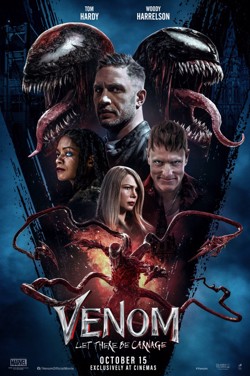 (SS) Venom: Let There Be Carnage