Home Blog list page Shang-Chi and the Legend of the Ten Rings: discover the reactions to Marvel's latest

Shang-Chi and the Legend of the Ten Rings: discover the reactions to Marvel's latest Marvel Studios' Shang-Chi and the Legend of the Ten Rings is the latest step in Phase Four of the Marvel Cinematic Universe (MCU). In the wake of Black Widow, we now get the first MCU character fronted by an actor of Asian heritage: martial artist Simu Liu who plays the gifted yet conflicted Shang-Chi of the title.

Our central hero is haunted by the memory of his father, Wenwu (Tony Leung), who attempted to groom his son for a role in a feared criminal organisation. Decades later, Shang-Chi has found sanctuary in America, but he then discovers Wenwu has morphed into the dreaded Mandarin, head of the Ten Rings crime syndicate.

The stage is set for an exciting father-son showdown replete with all manner of magical abilities and rapid-fire fight sequences. The first reactions to Shang-Chi have now come in and they praise a visually inventive, standalone Marvel movie that's able to carve out its own identity.

#ShangChi is awesome. This movie hits all that Marvel does well (pacing, humor, character) and adds action like we’ve never seen from the MCU before! 👏🏻👏🏻

Lots of people are about to have a new favorite Marvel hero.

In many ways it feels like the least MCU movie of the MCU, and I think a lot of people will really love that. It’s a great standalone adventure/origin story and now I’m excited to see how Shang-chi fits into the future of this cinematic universe.

Phase 4 is magical and mystical and I'm here for it. If #ShangChi is the direction the next phase of the MCU is heading, bring on #Eternals and #DoctorStrange2. pic.twitter.com/t05bptMJma

Shang-Chi is a blast! Marvel delivers a wuxia/fantasy/superhero movie mash-up that’s a lot more fun than how the trailers have been selling it. Exciting action, great cast (Tony Leung rules, of course). This is the MCU back doing its thing on a high level again. #ShangChi pic.twitter.com/eW9bxF9QNB

Those #ShangChi action set pieces are STUNNERS. Choreography, cinematography, costume design, VFX - all on point and come together to make those fights MCU standouts. pic.twitter.com/ZfbT66XXsb

#ShangChi kicked ass! Come for the killer fight scenes, dark mysticism, and martial arts mayhem, but stay for the thoughtful rumination on family, grief, and legacy.

The whole cast is terrific! Simu Liu is a superstar. Tony Leung and Michelle Yeoh are international treasures. pic.twitter.com/Rt7QAWK1T3

The #ShangChi crowd was the most enthusiastic I have been with since Endgame. Couldn’t hear some of the post credit scene dialogue due to cheering. Shang and Katy are instant MCU all stars pic.twitter.com/tQigQFY6ey

#ShangChi is an absolute triumph, unexpectedly spiritual and emotionally complex, with some of the very best action in the MCU. @SimuLiu is your new favorite Avenger and the movie’s myriad influences (everything from Jackie Chan to Hayao Miyazaki) pay off big time). Astounding.🐉 pic.twitter.com/72Yubnb4KV

When people ask me what I thought of a movie I always ask myself would I see the film again tomorrow. I would definitely watch #shangchi again tomorrow. Can’t wait to talk about it more.

Also the first after the credits scene is a great one… pic.twitter.com/GGTHSi4uoC

No doubt these reactions have got you all fired up. The good news is the film is not too far away: Shang-Chi and the Legend of the Ten Rings hits Cineworld screens on 3rd September. 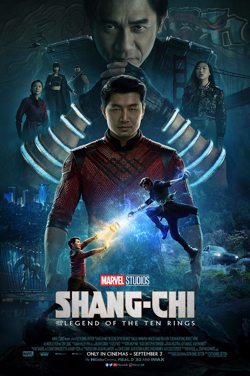 (2D) Shang-Chi And The Legend Of The Ten Rings