Director Ridley Scott is not slowing down any time soon. The celebrated director of Alien (1979) and Blade Runner (1982) returns to one of his favourite sub-genres, the historical epic, with his new movie The Last Duel, written by and starring Matt Damon and Ben Affleck.

It's an all-star cast working with a screenplay that balances all aspects of the conflict from multiple perspectives. Scott keeps us on our toes with regards to the truth, holding up a mirror to contemporary gender politics while also indulging in some rip-roaringly bloody battle sequences that have earned the movie an 18 certificate.

To get you ready for The Last Duel, we've rounded up all of Scott's prior excursions into the realm of the historical drama. From the Roman colosseum to the Napoleonic Wars, Scott is a director who has traversed multiple time periods with style and vigour.

Scott's debut feature arrived after a longstanding career in commercial advertising. It's a sumptuous and confident debut, casting Keith Carridine and Harvey Keitel as warring Napoleonic footsoldiers in 19th-century France whose grievance results in several hand-to-hand duels across the years. The sword fights are intimate and visceral, the gorgeous cinematography adopts a watercolour painting aesthetic and there's a distinct sense of melancholy as the sense of valour fluctuates with the passing of the political season.

This one's a bit of a cheat, given that Legend occupies a fantastical historical universe. Nevertheless, we'll make an exception for Scott's flawed but typically handsome production, a fairy tale by turns winsome and broodingly portentous. Tom Cruise is the young hero pitted against the Lord of Darkness (a ripe Tim Curry), and the extraordinary landscape is populated by all manner of unicorns, goblins and elves. The production was troubled with the 007 stage at Pinewood burning down midway through, and Jerry Goldsmith's score being junked in favour of a new soundtrack from Tangerine Dream.

One year after his critically acclaimed road-trip drama Thelma and Louise, Scott returned to the realm of the historical epic. 1492: Conquest of Paradise concerns itself with the pioneering voyage of Christopher Columbus as he ventures to the new world and discovers its indigenous peoples. Propelled by a typically atmospheric Vangelis soundtrack, the strong cast includes Gerard Depardieu, Frank Langella and Scott's former Alien cohort Sigourney Weaver.

After several years of disappointing flops including G.I. Jane (1997), Scott came roaring back with his definitive historical movie. Russell Crowe gives a mighty, Oscar-winning performance as the vengeful Roman general Maximus, who works his way up the colosseum ranks to take vengeance on the malicious Emperor Commodus (Joaquin Phoenix). Scott's reputation for world-building is on magnificent display as he whisks us into the past to reconstruct ancient Rome. The film's groundbreaking use of CGI to replicate the layers of the colosseum is just one of several remarkable elements in this critical and commercial smash.

Masterpiece or disappointment? Opinion towards Kingdom of Heaven varies depending on whether one has seen the theatrical cut or the director's cut. The former was generally regarded as a dramatically lightweight account of the Crusades, specifically the fight for Jerusalem during the 12th-century Battle of Hattin. Despite Orlando Bloom's less-than-sturdy presence as hero Balian of Ibelin, the director's cut was startlingly different, possessing greater nuance in its character moments and action sequences. This is, of course, a Scott hallmark: his director's cut of 1982 sci-fi masterpiece Blade Runner was considered definitive until the Final Cut was released in 2017.

Sneer at 1991's Robin Hood: Prince of Thieves all you want, at least it was entertaining (sometimes for all the wrong reasons). Scott's morose reimagining of the Sherwood Forest legend intentionally strips much of the magic from the proceedings, aiming to lend more historical veracity in the manner of The Duellists. Its intentions may be admirable but the movie is a bit of a plod with its gloomy cinematography, reams of exposition and a much-maligned Russell Crowe accent that veers from Newcastle to New Zealand and back again.

The Biblical Plagues are reimagined by Scott in this feast of production design and effects. Christian Bale is Moses, pitted against Joel Edgerton's Rameses as he vows to lead the Jews out of Egypt and away from persecution. Scott doesn't add much that hasn't been seen in previous Biblical epics but there's no denying his flair for a visually stunning set-piece.

Click here to book your tickets for The Last Duel, opening in Cineworld cinemas on 15th October. 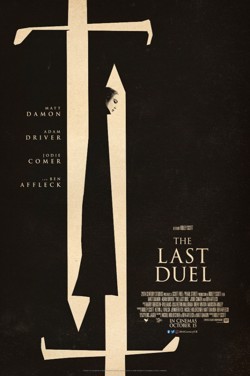