There's a new hero in town in the first trailer for Disney's Raya and the Last Dragon. Star Wars: The Last Jedi actor Kelly Marie Tran voices the eponymous Raya, a self-proclaimed guardian of the 'dragon gem' who occupies a deeply divided world. (Already, we're seeing some contemporary parallels.) Before we get to the trailer, check out the new poster. The official synopsis is as follows: "Long ago, in the fantasy world of Kumandra, humans and dragons lived together in harmony. But when an evil force threatened the land, the dragons sacrificed themselves to save humanity. Now, 500 years later, that same evil has returned and it’s up to a lone warrior, Raya, to track down the legendary last dragon to restore the fractured land and its divided people. However, along her journey, she’ll learn that it’ll take more than a dragon to save the world—it’s going to take trust and teamwork as well."

With its Chinese heroine, landscapes and mythology, the movie will inevitably draw comparisons to Mulan, both the 1998 original and the recent remake.However, this is an entirely original Disney property, not built on any pre-existing fairy tale. Nor is it a reboot/reinterpetation of something that has gone before. Instead, directors Don Hall (responsible for adorably squidgy android Baymax in Big Hero 6) and Carlos Lopez Estrada (a Disney newcomer who scored an indie hit with drama Blindspotting) are seeking to immerse audiences in something completely fresh.

Even so, as with all great Disney movies, we get the sense that the show will be stolen by the cute sidekick. Mulan (the animated version) had Mushu, voiced by Eddie Murphy. Raya has Tuk-Tuk, a delightful cross between a beetle and a hamster. He appears to grow to giant size later on the in the trailer, so imagine there's some magic involved. (Either that or his species just develop very quickly.)

Scroll down to watch the trailer. Raya and the Last Dragon is scheduled (at the time of writing) to sweep onto screens on 12th March 2021. Tweet us @Cineworld if you think this will become a new Disney classic. 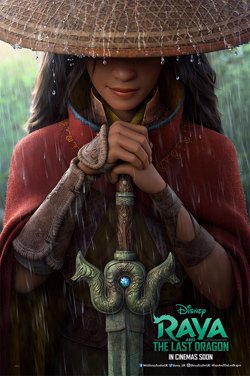