Director Bong Joon-ho's new movie Parasite screened in advance for Cineworld Unlimited members on Friday. This critically-lauded South Korean thriller is the story of a poor family that invades the lives of their wealthier counterparts – with disastrous consequences.

The movie has already received rave reviews and several Oscar nominations, including historic South Korean firsts in the Best Picture and Best International Feature categories. So what did Unlimited viewers make of it?

Sam says the movie blew him away, and that it's more than deserving of the accolades being heaped on it.

#Parasite lives up to the hype AND THEN SOME.
Absolutely breathtaking filmmaking.
My jaw was on the flaw for the last hour. @cineworld #CineworldUnlimited pic.twitter.com/d8yyRaDnlw

I thank god for films like Parasite and for @cineworld for letting me see them early. What a ride! An absolute blast from start to finish.

Fake Shemp describes the movie as an emotional rollercoaster.

Funny, moving, with such twists and turns, awesome of @cineworld to have an Unlimited preview of Parasite. So glad to see it on the big screen. #FilmTwitter pic.twitter.com/45AFMu7cer

Clare says she can't wait to engage with the film's twisted atmosphere all over again.

LOVED Parasite. So convincingly acted and well plotted, I gasped multiple times. I can see why it’s had so much praise.
Thank you @cineworld! I hope you’re planning a mainstream release so I can have a second watch!! pic.twitter.com/nbuFJyjvIN

Christopher Dray says he loved the movie, although advises potential viewers to go in unawares.

Another @cineworld #UnlimitedScreening and this time it was (my much anticipated) #Parasite - definitely lives up to the hype. Just wow. The best unlimited screening yet to be honest and there's been 5 this month  Best to go in knowing nothing else about this film... *****

And Kyle Snape says the movie is a rare example of 10 out of 10 perfection.

I rarely come out of a film thinking something is worth a 10/10 and also one of my new all time favourites.

It has completely changed with Parasite. What an actual marvel of a film. The perfect balance of thriller, subversion and social commentary wrapped in an entertaining bow.

Parasite is released in Cineworld cinemas on the 7th of February. If you were at Friday's screening, tweet us your reactions @Cineworld and using #CineworldUnlimited.

Don't forget about your next Unlimited screening: Steve Coogan satire Greed, which previews in advance on the 28th of January. 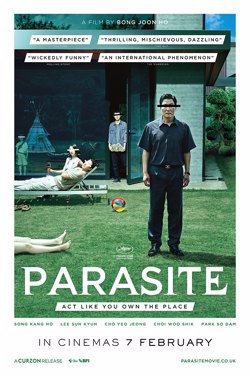