Cineworld isn't just your destination for the latest and greatest movies. It's also a showcase for lively and engrossing event cinema, from documentaries to opera, theatre and ballet.

If you're looking for inspiration, scroll down to find out what's coming soon from National Theatre.

Shakespeare's delightfully whimsical fantasy-comedy famously observed that "the course of true love never did run smooth". Now the National Theatre's acclaimed staging returns to Cineworld screens, captured at the Bridge Theatre in London with Game of Thrones' Gwendoline Christie as the imperious Titania. Nicholas Hytner directs and transforms the environment of the theatre into a living, breathing forest where anything can happen.

Click here to book your tickets for NT Live: A Midsummer Night's Dream.

This three-part story of a family company that changed the entire world comes from Oscar-winning Skyfall and 1917 director Sam Mendes. Stefano Messini's story begins in 1844 and spans 163 years, with Simon Russell Beale leading the cast. This production was filmed in 2019 and was nominated for five Olivier Awards.

Click here to book your tickets for NT Live: The Lehman Trilogy.

Sherlock star Andrew Scott collaborates with director Matthew Warchus in this sparkling adaptation of the Noel Coward classic. When actor Gary Essendine's life starts to spiral out of control, he finds himself engulfed by an identity and relationship crisis that is as pointed and perceptive as it is amusing.

Screen veterans Bill Pullman and Sally Field headline Arthur Miller's scorching drama of family relationships. Beginning in 1947, All My Sons zeroes in on a stable American family whose existence is rocked by wartime loss and skeletons in the closet. Jeremy Herron directs this adaptation, which was captured at the historic Old Vic Theatre in London.

Click here to book your tickets for NT Live: All My Sons.

Phoebe Waller-Bridge's painfully perceptive, and painfully funny, one-woman show Fleabag eventually gave rise to the critically acclaimed TV series of the same name. Now's your chance to return to where it all began, the original production that played to sell-out crowds in both London and New York. With its spot-on observations about relationships and messiness of modern life, you'll nod, cringe and laugh in equal measure.

Click here to book your tickets for NT Live: Fleabag.

Which National Theatre production will you be watching? Let us know @Cineworld. 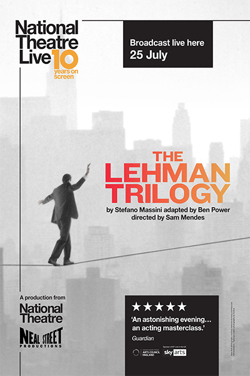