Marvel Studios' Eternals is the latest movie in the Marvel Cinematic Universe (MCU), and it arrives in Cineworld cinemas this week. Scroll down for all the essential details on the new Marvel blockbuster.

What is the storyline of Eternals?

Eternals introduces a new group of super-beings, created by the Celestials and sent to Earth eons ago to safeguard mankind from the Deviants. The Eternals are forbidden to intervene in man-made conflicts – they must only assist when their nemeses the Deviants rear their head. When the Deviants re-appear after centuries, Eternals leader Ajak must reunite her team, now scattered across the world, to come together once more.

Where does Eternals come in the Marvel Cinematic Universe chronology?

Eternals is the latest chapter in Marvel Phase Four. The trailer references the 'snap' undertaken by Thanos (Josh Brolin), so it's clear that Eternals takes place in the wake of Avengers: Infinity War and Avengers: Endgame. How Eternals will impact on Marvel Phase Five remains to be seen.

Who is directing Eternals?

Chloé Zhao is directing Eternals, the Oscar-winning director of Nomadland and The Rider. Zhao is a maverick filmmaker whose unique blend of documentary realism and fictional narrative has been evident in her previous films. Marvel Studios president Kevin Feige has explained that he sought Zhao's grounded sense of earthy drama, and her love of filming on location.

Who are the characters of Eternals?

Check out the following character posters to discover the Eternals ensemble.

How is Eternals aiming to be a more diverse Marvel movie?

What has been the critical response to Eternals?

The critical response to Eternals has been varied, and we've highlighted a pair of contrasting reviews to show you why. Writes Owen Gleiberman for Variety: "Zhao’s sensibility, to a degree, comes through — in the casual humanity of the characters, in the flow of quip and conflict and passion (at times romantic), in the beauty of the effects, in the no-sweat way that Zhao scales up her logistical skills. She’s a master craftswoman, and “Eternals,” while too long (157 minutes? really?), is a squarely fun and gratifying watch."

On the other hand, Slate critic Dana Stevens is less convinced: "Eternals is as sociologically inclusive and as pictorially beautiful as any movie in the franchise, with scene after scene bathed in the warm light of Zhao’s favorite time of day, the pre-dusk “golden hour.” But it’s also one of the weakest Marvel movies I’ve seen, meandering and wan. It takes place over a vast timespan in locations all over the globe (and the galaxy), yet it has the curiously claustrophobic feel of a Saturday afternoon serial filmed entirely in a windowless studio."

When is Eternals released in the UK?

Eternals is released in Cineworld cinemas on 5th November. Click here to book your tickets for Eternals.

What is the next Marvel Studios movie after Eternals?

Spider-Man: No Way Home is the next movie in Marvel Phase Four, and is due for release on 17th December. 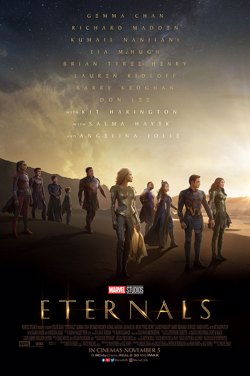 What's On At Cineworld: Lightyear trailer, Dune reaction and more