Home Blog list page Like a Boss: discover the reactions to our Unlimited Bring a Friend screening

Like a Boss: discover the reactions to our Unlimited Bring a Friend screening

Like a Boss was our first-ever Cineworld Unlimited screening where people could bring their friends along. Well, how else were we going to stave off those Blue Monday feelings?

Bridesmaids' Rose Byrne and Girls Trip's Tiffany Haddish star in this raucous comedy about two friends whose business is co-opted by a scheming rival (Salma Hayek). So what did Unlimited members make of it? Let's start with Beth's reaction.

Early @cineworld unlimited screening of Like a Boss and oh my god it’s SO FUNNY. Female comedy’s are so strong these days and I loved this so much, cast is incredible and I got free sweets happiest blue Monday! pic.twitter.com/zUf2fO3e8x

Kyle Liles says the movie's laughs are definitely not all revealed in the trailer.

Really enjoyed tonight's @cineworld #unlimitedscreening of #LikeABossMovie really funny film had me laughing throughout not just one of these comedies where they show all the good parts in the trailers. Definitely recommend

Natalie Simmons says it was the perfect Blue Monday solution.

#LikeABoss Not something I'd usually rush to watch, but it's better than the trailers made it appear & after a truly rubbish 'Blue Monday' a bit of light hearted humour was just what was needed....oh & the free sweets were a perfect addition

Lynda Sharp says it was a feel-good experience.

@LikeABossMov was such a good movie to de-stress with tonight. Such fun, such laughs & a great story of the highs & sometimes lows of a true friendship. Brilliant cast & some truly funny moments. Will watch again for sure. Thanks for the Candy King too #CineworldUnlimited

Nevertheless, the movie didn't work for everyone. Marc France says the movie is fairly disposable, although saved by the efforts of the cast.

If your wanting to waste 90 minutes with some feel good fun, you could do worse.
Plot is very predictable, but the cast looked like they had a lot of fun, and that comes over in the finished film.
4/10

And Dave Billingsley says he was expecting more laughs.

A few laugh out loud moments, but I'm afraid this one just didn't do anything much for me. It's not as terrible as some reviews make it out to be, but given the cast list, I really hoped for better.

Like a Boss is released in Cineworld cinemas on the 21st of February. If you were at last night's screening, tweet us your reactions @Cineworld and using #CineworldUnlimited.

Our next Cineworld Unlimited screening is acclaimed South Korean drama Parasite. Director Bong Joon-ho (Snowpiercer) presents this darkly funny satire about a poor family who inveigle their way into the lives of a wealthy brood – with shocking consequences. The movie screens in advance on the 24th of January.

Don't miss out on the latest previews – join Cineworld Unlimited and you'll be the envy of your friends with advance screenings, special offers and lots more. 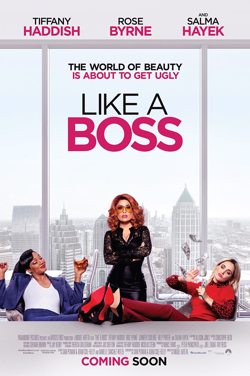