The upcoming adaptation of the classic sci-fi novel Dune is already being hailed as a visually spectacular masterpiece by many critics. Blade Runner 2049 director Denis Villeneuve has split Frank Herbert's 1965 source novel in half, promising to paint a truly epic saga of betrayal, dynastic conflict and exploitation of natural resources.

At the centre of the tale is a complex struggle between two rival families: the Atreides clan who have been granted stewardship of the desert planet Arrakis, and the vengeful Harkonnens. Prospective Atreides heir Paul (Timotheé Chalamet) is forced to flee into the desert after the Harkonnens launch an insurgent attack on his family.

Paul feels compelled to live up to his father, Duke Leto (Oscar Isaac), but must instead seek his own survival with his mother, Lady Jessica (Rebecca Ferguson), a 'bene gesserit' or seer, whose collective has been experimenting with royal bloodlines to bring about the arrival of a new messiah.

The focus on the new Dune movie has inevitably caused many to look back to the earlier Dune adaptation, helmed by David Lynch and released in 1984. It was a notorious flop, one that even the director finds hard to speak about, and continues to be lambasted for its terrible inner-monologuing, Sting's hot pants and generally stilted tone.

However, with the 1984 version of Dune getting re-released in Cineworld cinemas, we wanted to find some good things to say about it – and we did. Scroll down to discover the much-maligned film's merits, which nevertheless are set to pale in comparison with the new movie.

1. The conception of the worms

For a film made in 1984, pre-CGI and with a reliance on practical effects, the Arrakis sandworms still pack quite a punch. The scene early on in which the spice harvester is devoured by one of the monsters is genuinely chilling and spectacular, even if a later worm-related set-piece (which we won't spoil for the uninitiated) is undone by clumsy staging. However generous one is to Lynch's vision, Villeneuve's film promises to wipe the floor with it, boasting worms whose design took over a year to get right.

Dune was originally meant to be made by Chilean surrealist filmmaker Alejandro Jodorowsky with designs from Alien's H.R. Giger. Sadly, that fell through, although Lynch's film is genuinely impressive on a physical level, capturing both the desolation of Arrakis, the gilded interiors of Caladan and the mechanized horror of the Harkonnen homeworld, Giedi Prime. It is, however, more Lynch than it is Herbert, and Villeneuve's vision promises to be more faithful, fusing cinematography from Grieg Fraser (Rogue One), production design from Patrice Vermette (Villeneuve's own Arrival) and costumes from Jacqueline West (The Revenant).

3. The menace of Baron Harkonnen

Lynch adds plenty of his own grotesque flourishes to Dune's main villain, including hideous facial pustules that regularly have to be sutured. Coupled with Kenneth McMillan's cackling performance, resplendent as the evil Baron Harkonnen floats around on his 'suspensor' (floating device), and the level of queasy threat is assured. We haven't seen much of Stellan Skarsgard's take on the Baron so far, but several reviews of the film have pointed to his pallid, lurking, corpulent corruption, which sounds more akin to Herbert's novel.

4. The casting of Kyle MacLachlan

Sure, he was ever so slightly too old to play the naive but strong-willed Paul Atreides. Nevertheless, MacLachlan (who would make a strong impact in Lynch's 1986 thriller Blue Velvet) has the right amount of regal comportment to convince us of Paul's journey Nevertheless, the new movie's Timotheé Chalamet has already been acclaimed for his definitive take on Paul: an authentic depiction of a blueblood royal heir who embraces an altogether different kind of destiny amidst the sandy wastes of Arrakis.

5. The score by Toto

Yes, that's right, the 'Africa' songsters composed the score for Lynch's movie, if you needed reminding. The Dune 1984 score is an intriguing hybrid of Toto's electro-pop sensibilities and the grandiose sweep of John Williams' Star Wars scores. In the midst of a flawed movie, the music effectively communicates a sense of scale and awe.

That said, the film's grandest theme, the Prophecy theme, comes from electronic pioneer Brian Eno, whose musical aesthetic fits in perfectly with the surreal futurism of Arrakis.

The 2021 version of Dune has a far more abrasive and experimental score courtesy of Hans Zimmer, mixing wailing vocals and even bagpipe arrangements to confound and enchant in equal measure.

Intrigued? Then click here to book your tickets for Dune 1984, re-released in Cineworld cinemas on 24th September. And it will be time to set course for Arrakis again when the new Dune is released on 21st October. 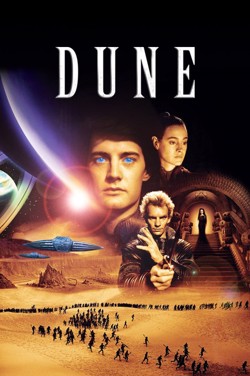