What a week this is for Cineworld Unlimited members! On Tuesday, we invited you to a special Unlimited Screening of the new Matt Damon movie, Stillwater – and you can read some of the Twitter comments about that here. And tonight, we have a second Unlimited Screening – this time of the highly acclaimed Zola.

Directed by Janicza Bravo, Zola is based on a series of viral tweets penned by Aziah 'Zola' King, and tells the extraordinary story of a Detroit waitress and part-time stripper (played by Taylour Paige) who's enticed by a female customer (Riley Keough) to join in a weekend of hedonism in Florida. Things take a sinister and surreal turn when she gets there, though, with pimps, gangsters and other larger-than-life characters being thrown into the mix.

Zola has been lauded by critics, with Shannon Miller of The A.V Club writing: "Zola is first and foremost a zany, catastrophic road-trip dramedy, one that balances the whimsy of social media with the harrowing reality of being trapped in a dangerous situation."

And Variety critic Owen Gleiberman gave it the thumbs-up, too, describing it as "a true story so extravagant it feels like it must have been made up. It's a mini volcano of sex and violence and danger and deception. It's a close-to-the-bone portrait of women who work in the sex industry. It's a youthquake as real as American Honey. It's a piece of pure filmmaking bravura."

To book your tickets for tonight's Unlimited Screening, click here.

If you do attend tonight's Unlimited Screening, we'd love to hear what you thought of the film. Leave us a comment @cineworld. 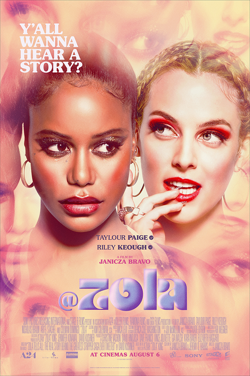