It's time to snap those fingers and dance like your life depended on it, because a new trailer has landed for Steven Spielberg's West Side Story remake. The movie is one of 2021's buzziest propositions: a reworking of the Oscar-winning 1961 classic, itself derived from Stephen Sondheim and Leonard Bernstein's Broadway production. Throw in the presence of Spielberg, plus a hip young cast and a highly accomplished team of musical personnel, and you can see why people are excited. Here's the latest poster.

As before, the story is a reworking of Romeo and Juliet, centering around the rivalry between two New York gangs: the Jets and the Sharks. Thrown in the mix are Tony (Baby Driver's Ansel Elgort) and Maria (Rachel Zegler, making her feature film debut), two lovers on opposite sides of the divide who must circumnavigate the broiling gang tension.

Doing justice to Sondheim and Bernstein's original compositions are David Newman (Matilda), who adapts and arranges the melodies, and conductor Gustavo Dudamel. The latter stepped in for John Williams to conduct the opening credits crawl of 2015's Star Wars: The Force Awakens. Meanwhile, renowned vocal coach Jeanine Tesori has been schooling the young actors in their vocal delivery.

This is the first fully-fledged musical from Spielberg, although the opening of 1984's Indiana Jones and the Temple of Doom, set to a Busby Berkeley-aping rendition of 'Anything Goes', has already demonstrated his love for the genre. As for Elgort, he's already got the chops: just days after his 18th birthday, he premiered a lead role in an Off-Broadway production of Regrets in March 2012. He also demonstrated his command of tight-knit choreography in Edgar Wright's 2017 hit Baby Driver (for his audition, Elgort had to both dance and lip-sync to a song of his choice).

Zegler, for her part, isn't best known as an actor, but she has a strong YouTube presence. She beat out 30,000 applicants to win the role, impressing Spielberg with her audition performances of West Side Story songs 'Tonight' and 'I Feel Pretty'. There's also an appearance from original Maria actor, Rita Moreno.

West Side Story is set for release on 10th December. 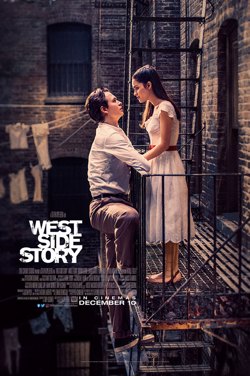