The anti-Avengers march into action in the enjoyably anarchic DC superhero movie The Suicide Squad. Director James Gunn once again relishes his penchant for the grotesque and memorably surreal in this ensemble action movie that very much puts emphasis on bad behaviour and bloodshed.

The movie mixes up characters from the previous big-screen iteration of the Suicide Squad with a host of new faces. Familiar faces include Margot Robbie's joyously unhinged Harley Quinn and Viola Davis' steely, manipulative government agent Amanda Waller. The new kids on the block range from Idris Elba's Bloodspot and John Cena's Peacemaker to David Dastmalchian's Polka Dot Man (his killing method is suggested in his name) and Sylvester Stallone's monosyllabic yet endearing King Shark.

Get a flavour of the movie's off-the-wall vibe in these behind-the-scenes featurettes, as Gunn talks you through the squad's appropriately suicidal mission, not to mention the hilariously weird onslaught of abilities and character motivations present in the movie.

Click here to book your tickets for The Suicide Squad, on release now in Cineworld cinemas. 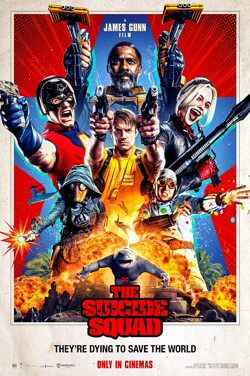