Ryan Reynolds has his work cut out in comedy sequel The Hitman's Wife's Bodyguard. In the first movie, The Hitman's Bodyguard, he had to contend with a cantankerous Samuel L. Jackson. This time around, he's got both Jackson and a fiery Salma Hayek to deal with.

Unlicenced bodyguard Michael Bryce (Reynolds) is looking for a break from the violent life. However, he cannot escape for long when Darius Kincaid's (Jackson) volatile spouse Sonia (Hayek) coerces him into a mission even more dangerous than the first.

Regarding the ripe language, Hayek told Empire Magazine: “I started doing the same in real life. The worst part is that the movie was over and I’ve had to watch myself, pull myself back. I’m like, ‘I have to let Sonia go.’” It’s something that didn’t always prove easy – and made for some awkward exchanges as she tried to shake her role. “I’d be in situations and go, ‘Oh, m**********r!’ One time I swore in front of my daughter and I was like, ‘I’m so sorry, it’s not me – it’s the character!’”

Director Patrick Hughes is back, having steered the first film to a solid $176 million worldwide. Check out the new trailer for The Hitman's Wife's Bodyguard ahead of its theatrical release on 21st June 2021. 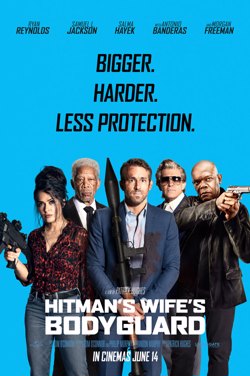