Anthony Hopkins delivers his most powerful performance in decades in drama The Father. Writer/director Florian Zeller adapts his own stage play (to Oscar-winning effect), eliciting from Hopkins a mercurial, riveting portrayal of an ailing man suffering from dementia.

The film puts one in the mindset of the central character, as he starts to envisage individual people in a host of different guises. Just as disconcertingly, the landscape of his beloved flat starts to change around him, a disorienting experience that elicits greater compassion for people suffering with this debilitating condition.

Hopkins won his second Oscar for the film (his first was for 1991's The Silence of the Lambs), and this summer, you can experience the full impact of his abilities on the big screen. Hopkins is matched every step of the way by the Oscar-nominated Olivia Colman, playing the daughter whose loyalty to her father becomes challenged in the midst of these harrowing circumstances.

Here's the new poster for the film. You can get a flavour of Hopkins' majestic turn in the following clip. It teases the film's push and pull dynamic between a man clinging to his independence and the slowly impending reality of the ageing process – a universal story that's set to move all those who watch the film.

The Father gets its theatrical release on 11th June. Let us know @Cineworld if you can't wait to watch Hopkins and Colman deliver the acting fireworks. Don't forget to check out our full list of Cineworld re-opening movies from May 19th. 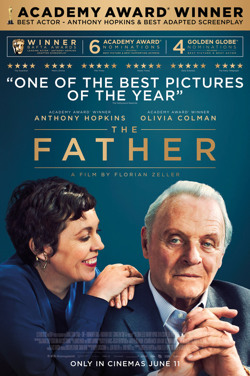