It was somewhat unfathomable back in early 2001 that, two decades later, the Fast and Furious saga would still be burning rubber and going strong. And yet, here we are.

With Fast & Furious 9 set to roar onto our screens in April 2021, here's our revved-up guide to the blockbuster series so far.

The genesis of the series began when director Rob Cohen (Dragonheart) read an article in 1998 called 'Racer X', which detailed illegal street racing in New York City. Intrigued, producer Neal Moritz got involved, a script was written and The Fast and the Furious went into production in 2000.

The engines were revved to the max with Cohen directing and Vin Diesel, the late Paul Walker, Michelle Rodriguez and Jordana Brewster leading the cast. Walker plays Brian O’Conner, an LAPD officer who agrees to go undercover to help the authorities track down a group of carjackers seemingly led by Dominic Toretto (Diesel).

O’Conner manages to infiltrate the group and initially sets about bringing Toretto and his gang – namely Letty (Rodriguez), Johnny Tran (Rick Yune) and others – to justice. However, after months of being around the gang, Brian soon falls for Dominic’s sister Mia and, as the credits are about to roll, Brian lets Dom take his car and vanish, seemingly forever.

Released in the USA on the 22nd of June 2001, The Fast & The Furious was a huge success, grossing over $207 million worldwide. So, naturally, a sequel was mooted – but it didn’t quite pan out the way many had foreseen.

Universal didn’t hang around in putting together plans for a follow-up – 2 Fast 2 Furious – and set a 2003 release date. But the distributor was dealt a big blow in its pre-production, with news that Vin Diesel had decided against returning as Dom (citing script issues and wanting to make Pitch Black spin-off The Chronicles of Riddick instead).

As a result, the focus turned to Walker's returning Brian who, fleeing the authorities after his actions years earlier, is eventually arrested. But instead of being incarcerated, he is offered a deal: to go undercover once more, this time with his chosen partner Roman Pearce (Tyrese Gibson), and to bring down drug lord Carter Verone (Cole Hauser) with his records expunged if they succeed. The film worked and a franchise was born, taking $236 million – but part three of the saga was a different beast altogether.

Arriving in 2006, The Fast and The Furious: Tokyo Drift would act more like a spin-off than a sequel and would see the filmmakers try, in some ways, to establish their own universe long before Marvel. The plan was to introduce new characters – in this case, Sean Boswell (Lucas Black) and Han Lue (Sung Kang) – but still fuel it with all the usual Fast & Furious-y things including, of course, fast cars. Directed by Justin Lin, who would later return to the saga several times, it was only a modest success and the franchise laid dormant for three years – until a familiar face returned…

In 2009, a small ret-con of sorts was needed. Given that two of the movies in the series had pressed on without Diesel, Rodriguez and Brewster, part four – named Fast & Furious – was set between installments two and three. This was so that the filmmakers could ensure a continuity link between those two films and, potentially, keep the series going post-release.

In Fast & Furious, Dom and Brian are forced to work together once more, but this time it’s more personal: they're hunting for drug lord Braga (John Ortiz), and hope to avenge the murder of Dom’s girlfriend Letty (Rodriguez). The film proved a huge hit, the most successful in the series so far, and the franchise was given the shot of adrenaline it needed.

Two years later, Fast & Furious Five saw the series become the true juggernaut franchise that would shatter box-office records for years to come. Moving away from the street-racing lifeblood of the early movies, the filmmakers decided to move into the realm of a heist thriller on wheels, focusing on elaborate plots and huge set-pieces that would bring tanks, planes, and other modes of transport into the fray.

In Fast & Furious Five, Dom's gang plan to rob a corrupt businessman (Joaquim de Almeida) of hundreds of millions of dollars, all while newcomer DSS agent Luke Hobbs (Dwayne Johnson) follows their every move. A gigantic, over-the-top and classic summer action romp, the film ended up with takings of over $626 million.

A couple of years later, and Fast & Furious 6 was an even bigger success, with the whole cast returning and the action moving across the pond to London. There, Dom's crew are offered immunity in exchange for helping Hobbs take down Owen Shaw (Luke Evans) and his corrupt organisation of mercenaries. But there’s a shock in the offing: it seems Letty is alive and well and working with Shaw. More explosions, car chases and crazy stunts led to an even bigger box office, with takings smashing $788 million.

When Furious 7 sped around in 2015, it would prove to be a monumental success, game-changing in many ways. But it was beset with tragedy as, during the early stages of filming, Paul Walker tragically lost his life in a car accident.

The film, directed by The Conjuring's James Wan, paid an emotional tribute to Walker in its final moments with what Diesel has recently called “the best moment in cinematic history”. This time, Dom's team hopes to leave their criminal life behind – until Owen Shaw’s brother, Deckard (Jason Statham) plots revenge.

With escalatingly daft set-pieces involving flying cars and lots more, it's little wonder that $1.2 billion in grosses followed. Both Shaw and the aforementioned Hobbs would become series favourites, so much so that they spearheaded their own spin-off film in 2019, titled Hobbs & Shaw.

Fast & Furious 8 was, then, tinged with sadness with Walker’s passing. However, it also presented an opportunity to celebrate hiss legacy in the franchise by bringing the biggest film of the series to the screen – and director F. Gary Gray (Straight Outta Compton) surely did.

Now settled with wife Letty, Dom is brought out of “retirement” when he is coerced into helping Cipher (Charlize Theron), a cyber-terrorist intent on taking down governments, Dom’s gang, Hobbs and Shaw. Another huge success, the film took $1.2 billion at the box office, further cementing the series as one of the biggest franchises of all time.

So, what about Fast & Furious 9? Well, Justin Lin is back behind the camera, and it's stocked with a rogues' gallery of familiar faces, plus some exciting new ones. This time, Toretto must confront his long-lost brother Jacob, played by Bumblebee's John Cena, and Theron's nefarious Cipher is also back, pulling the strings. And there's also the slight issue of Han's return – he was presumed dead in Furious 7, so we can't wait to see how they explain that one.

In keeping with the series' globe-trotting mantra, the locations have ranged from London to Glasgow and Thailand, with the trailer promising another escalation of the action sequences. This involves a car swinging itself from cliff to cliff while attached to a metal cable – given the obvious and entertaining flouting of physics, surely it's only a matter of time before these guys go to space?

Fast & Furious 9 is released in the UK on the 24th of June 2021. Tweet us @Cineworld with your favourite moments from the Fast and Furious saga. 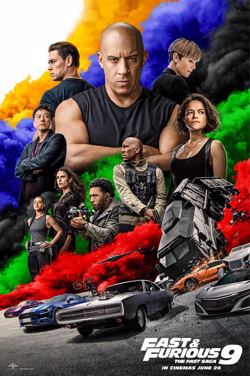