Do you like scary movies? You do? Then excellent news: Wes Craven's post-modern horror classic Scream is back in Cineworld cinemas to celebrate its 25th anniversary.

The movie was at the vanguard of the 1990s slasher film revival, lacing its numerous scare sequences with witty moments of knowing humour. The psycho, known as Ghostface, is well-versed in the clichés and tropes of horror cinema and uses that to darkly comic effect as the potential victims are forced to counter with their own knowledge – or face the grisly consequences.

Scream centrally focuses on the haunted Sidney Prescott (Neve Campbell), a young woman whose tortured family backstory becomes the lynchpin of the Scream franchise. The first movie was a critical and box office hit, fusing horror veteran Craven's flair for terror with Kevin Williamson's hip screenplay. The film spawned three sequels with a fourth on the way in 2022.

To get you prepared, here are 25 facts you may not have known about the original Scream.

1. Scream was originally titled 'Scary Movie', but changed to Scream at the last minute by producer Bob Weinstein (whose company Dimension Films distributed the movie).

3. Both Melissa Joan Hart and Brittany Murphy, among other actresses, auditioned for the role of Sidney, while Tori Spelling and Reese Witherspoon were considered as well.

4. The Exorcist actor Linda Blair makes a brief cameo as a local reporter.

5. Drew Barrymore was lined up for the role of Sidney but later opted to play the doomed Casey; Craven reasoned that it would be all the more shocking for audiences to see Barrymore killed off during the opening sequence.

6. Barrymore accidentally called 911 several times during the harrowing opening sequence, as the prop phone she was using hadn't been unplugged by the crew.

7. Rose McGowan, who plays Sidney's ill-fated friend Tatum, discovered she could actually fit through the doggie door during her death scene; this meant her clothing had to be nailed into place.

9. The murder of Principal Himbry (Henry Winkler) was inserted into the script after Bob Weinstein pointed out that too much time was passing without another death scene.

10. Craven was initially disinterested in making Scream, and wanted to move away from horror altogether; he was brought on after his proposed remake of The Haunting collapsed.

11. Neve Campbell was cast on the basis of her role in TV show Party of Five, although she was reluctant to take on another horror role so soon after her appearance in The Craft.

12. Skeet Ulrich was cast as Billy Loomis partly because of his resemblance to the young Johnny Depp in A Nightmare on Elm Street (1984), which Craven had directed.

13. Despite putting in a memorable performance as Stu, actor Matthew Lillard would later dismiss his acting as over the top and "horrible".

15. Craven was on the verge of being fired from the film after Bob Weinstein decreed the footage as not being scary enough; a 13-minute workprint was later constructed that convinced Weinstein of the project's menacing nature, and Craven stayed.

16. More than 50 gallons of fake blood were used during the production.

17. Principal photography for Scream took place over eight weeks between April 15 and June 8, 1996, on a budget of $15 million.

18. Craven ran into problems with the American ratings board, the MPAA, over the film's violent scenes, and was forced to make several cuts.

19. An intervention from Bob Weinstein, who stressed the film's comedic and satirical elements, helped prevent further cuts from being made.

20. The Scream score was the feature film debut for composer Marco Beltrami.

21. Beltrami confessed to not being a horror fan, instead opting to score many elements in the manner of a Western (the twanging guitar for David Arquette's Dewey).

22. Scream became the fifteenth highest-grossing film of 1996, and ran for nearly eight months after its initial release.

23. Kevin Williamson had attached five-page proposals for potential sequels to Scream when he originally sold the script, hoping to entice prospective buyers into buying a film and a franchise.

24. When Dimension Films bought the script, they secured Williamson for two future Scream films, should the original prove successful.

25. Wes Craven was assigned to direct two more Scream films after the runaway success of the first movie; they were released in 1997 and 2000, with a third arriving in 2011.

Click here to book your tickets for Scream, which is on release now in Cineworld cinemas. 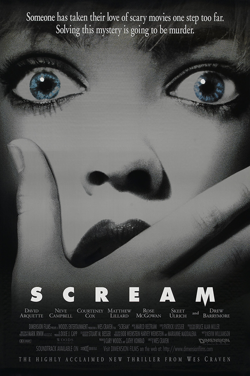