Boyfriends, girlfriends, super-powered vegans and Sex Bob-Omb advocates unite. Because Scott Pilgrim vs the World is getting a 10th-anniversary Superscreen release in Cineworld. Here's what you need to know.

What is the story of Scott Pilgrim vs the World?

Edgar Wright's cult comic book adaptation is a candy-coloured endorphin rush that assimilates all manner of gags and pop culture references at a fast and furious rate. Michael Cera plays the hapless Scott, a guy who is hopelessly in love with the seemingly unattainable Ramona Flowers (Mary Elizabeth Winstead).

Why unattainable? Because Scott has to fight his way through a series of battles with her seven evil exes (including a scene-stealing Chris Evans as prima donna movie star Lucas Lee). In-keeping with Wright's oeuvre, the film is visually dazzling and literate about a wide variety of topics, from comics to music and movies.

Although a box office disappointment on its initial release in 2010, Scott Pilgrim vs the World now commands a loyal cult following. And you can join your fellow Pilgrim-ites during our Superscreen event.

Superscreen combines breathtaking multidimensional sound, powered by epic Dolby Atmos speakers, with state-of-the-art projection and huge screens. Given the sheer level of detail in Wright's visual style, not to mention the sonic onslaught of hidden jokes in the sound design, Scott Pilgrim was made to be experienced in this format.

When is Scott Pilgrim showing in Superscreen?

Click here to book your tickets for Scott Pilgrim in Superscreen, which gets underway on 15th June. 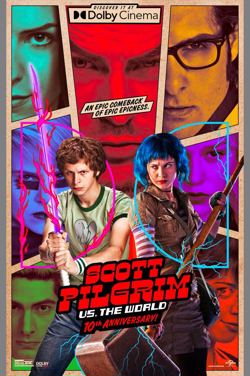