High prince of the macabre, James Wan, returns this month with his latest deliciously spooky offering. Malignant is very much in the mold of the director's hit franchises Insidious and The Conjuring, showing us how an evil force becomes attached to a vulnerable individual with terrifying consequences. A brand new trailer now teases more of this life and death battle.

Annabelle Wallis, who starred in the first Annabelle chiller in 2014, plays Madison, a troubled woman with unresolved trauma in her past. Video footage shows that she developed an apparent childhood friend named Gabriel – but was he, in fact, a friend... or a foe?

The older Madison discovers this to her detriment as Gabriel resurfaces, replete with murderous intentions and diabolical intent. Those fond of the jumpy ghost train aesthetic from Wan's earlier films are bound to have a ball, although Wan himself says that he was looking to do something a bit different. Certainly, Wan's visual ambition looks to have escalated, with a 360-degree tracking shot taking us from reality into an apparent nightmare scenario.

This is the director's first horror movie since 2016's The Conjuring 2 – since then, he's dived into the DC Extended Universe (DCEU) with the blockbusting Aquaman (2018). He's set to return to the DC fold with Aquaman 2, but before we get there, we can savour his return to the realm of the supernatural. The movie has been rated R in America for sequences of violence, so it sounds like we can also expect a few of the nasty impulses from Wan's very own Saw series, which he initiated back in 2004.

Malignant promises to scare up a storm when it's released in Cineworld on 10th September. 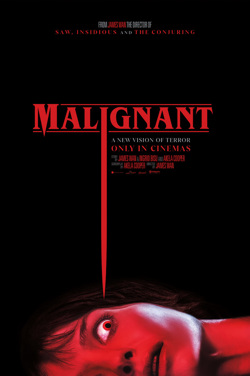