Home Blog list page In the Heights: everything you need to know

In the Heights: everything you need to know Movie musical In the Heights is poised to blow away the cobwebs of 2020 with a blast of Puerto Rican energy and passion.

It's adapted from Lin-Manuel Miranda's hugely successful stage musical of the same name, and it predates Hamilton by several years. Scroll down to find out more.

1. What is the story of In the Heights?

The official synopsis from distributor Warner Bros is as follows: "Lights up on Washington Heights... The scent of a cafecito caliente hangs in the air just outside of the 181st Street subway stop, where a kaleidoscope of dreams rallies this vibrant and tight-knit community. At the intersection of it all is the likeable, magnetic bodega owner Usnavi, who saves every penny from his daily grind as he hopes, imagines and sings about a better life." 2. When did In the Heights make its stage debut?

Years before his blockbusting sensation Hamilton, Lin-Manuel Miranda crafted In the Heights, a musical production that was intensely close to his Puerto Rican heritage and upbringing in New York's Hispanic community. Miranda devised the story in 1999 during his sophomore year at college, eventually blending it with, in his words, "freestyle rap, bodegas and salsa numbers".

Years later in 2008, In the Heights made its Broadway debut. This followed a 2007 Off-Broadway run and a 2005 Waterford Connecticut run. Miranda devised the music and lyrics that were later dramatised by Quiara Alegria Hudes, a Pulitzer-winning playwright. Together, they introduced audiences to the hopes and dreams of the Puerto Rican community, whose aspirations and struggles were placed at the forefront decades earlier in West Side Story, the landmark Stephen Sondheim/Leonard Bernstein musical. (That was later turned into a movie, and next year it will receive a remake from Steven Spielberg.)

In the Heights proved to be a global sensation, winning four Tony Awards out of thirteen nominations, and enjoying a global run that encapsulated countries including the UK, Japan, Australia, Peru, Germany and Denmark. The 2015 UK tour played at London's King's Cross Theatre, where it was nominated for four Olivier Awards including Best New Musical.

3. Who stars in In the Heights?

In the Heights' talented young cast is led by Hamilton star Anthony Ramos. Having originated the dual roles of John Laurens and Philip Hamilton on Broadway, he now stars in this big-screen Lin-Manuel Miranda adaptation as daydreaming bodega owner Usnavi.

4. Who directs In the Heights?

In the Heights is directed by Jon M. Chu, perhaps best known for his hit 2018 rom-com Crazy Rich Asians. The movie generated acclaim for its talented all-Asian cast, which lent authenticity to its charming and humorous story of the 21st-century Asian wealth divide. Given the cultural sensitivity that Chu displayed in making the movie, it bodes well for In the Heights, which similarly looks to avoid cultural appropriation and instead immerse its audience in the authentic Puerto Rican experience.

5. When is In the Heights released in the UK?

In the Heights is scheduled for UK release (at the time of writing) on 30th July 2021. Tweet us @Cineworld if you can't wait to see it. 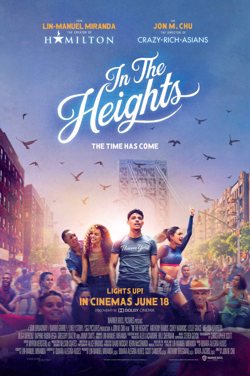