Brace yourselves for another round of jumpy horror, because The Conjuring: The Devil Made Me Do It is ready to scare up a storm. It's the latest instalment in the blockbusting 'Conjuring Universe' horror franchise, and the third Conjuring movie overall.

If you want to catch up with all the associated creaks, bangs and scares to have featured in the franchise thus far, here's our handy timeline.

A novitiate nun and a lapsed priest confront evil in a forbidding Romanian monastery in the first Conjuring Universe movie (at least, chronologically speaking). The Nun acts as the inception point for the terrifying Valak, a demon disguised as a sister in religious orders (with more than a passing resemblance to Marilyn Manson). Valak would later appear to terrorise Lorraine Warren in The Conjuring 2.

The origins of the possessed doll Annabelle are teased at (if not made all that explicable) in this prequel movie. The film actually begins with an opening car accident salvo, set in 1943, before the bulk of the action takes place in 1955 at a children's orphanage where the chilling Annabelle runs riot (not literally). Confusingly, the post-credits scene for this movie acts as an introduction to the events of The Nun, although the bulk of Annabelle: Creation's narrative takes place afterwards...

Several years later a chic 1960s couple, the Forms, take possession of the doll, unaware of its grisly past. They later witness a hideous, Charles Manson-style murder across the street from their house, and are soon attacked by the killers. It turns out that the main female culprit is the grown-up orphan Annabelle Higgins from the earlier movies, and she eventually takes her own life while clutching the doll, cementing their twisted bond – and spelling doom for the Forms.

This is a slightly complicated one. At the start, the Warrens place Annabelle in their museum of paranormal curiosities – that means it starts in 1968. We then skip ahead to 1969 as the Warrens' daughter Judy finds herself terrorised by the doll. However, this is complicated by the presence of a music box that Ed Warren placed in the museum during the events of The Conjuring – set in 1971. Yep, we're starting to glaze over a bit like Annabelle's expression.

The first Conjuring movie to be released in cinemas (in 2013) was a huge box office hit, director James Wan fashioning a nostalgic riff on classic ghost story conventions as seen in The Haunting (1963), The Amityville Horror (1977) and others. It served as our introduction to the intrepid Ed and Lorraine, bringing us the case of a Rhode Island farmhouse haunted by an evil witch. It was also the first time we got to see Annabelle up there on the big screen, although she was a more tangential presence in this one.

The Conjuring Universe expanded into Mexican lore with the story of the 'crying woman', a spectre with a penchant for terrorising families. The film's chronological position is confirmed when Father Perez (Tony Amendola) refers to battling with a possessed doll – locating this after the events of both Annabelle and the first Conjuring.

In the action-packed Conjuring sequel, we have a brief opening segueway into the notorious Amityville hauntings (1976), before the majority of the movie moves to Blighty. There, Ed and Lorraine must confront a dangerous poltergeist lurking in a seemingly unassuming suburban house. Even before we get to that, Lorraine is tormented by the spectre of evil nun Valak, and in the midst of the Enfield terror, we get introduced to a toothy new character called 'The Crooked Man'. We're still awaiting his spin-off movie.

The latest Warren case file to be adapted mixes courtroom drama with alleged paranormal activity. It dramatises the case of Arne Cheyenne Johnson (played in the movie by Ruari O'Connor), a young man on trial for killing his landlord. However, as per the movie, he then attempts to use demonic possession as a case for his defence, and the ensuing mystery drags in Ed and Lorraine, too.

Click here to book your tickets for The Conjuring: The Devil Made Me Do It, on release in Cineworld cinemas from the 28th of May. 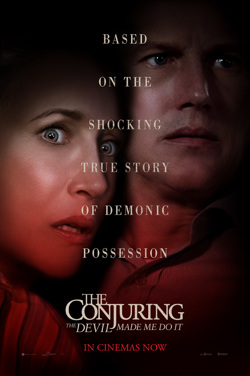