Titans will clash in the forthcoming 'MonsterVerse' epic Godzilla vs Kong. Warner Bros is set to unleash its latest instalment in the sci-fi action franchise, which started with Gareth Edwards' Godzilla in 2014. Since then, we've had the introduction of a new, radically bigger King Kong in Kong: Skull Island (2017) and a colossal struggle between Godzilla and his fellow beasties in Godzilla: King of the Monsters (2019).

Godzilla vs Kong is directed by Adam Wingard, who helmed cult Dan Stevens favourite The Guest in 2014. This is his first excursion into lavishly mounted, blockbuster filmmaking, as the irradiated giant lizard, who originated in the 1954 Toho Studios movie, locks wills with his equally imposing foe. The origins of King Kong date back to 1933, making him even older than Godzilla, so there's a real sense of heritage and prestige in the forthcoming fight for supremacy.

Warner has released the first poster for the movie, ahead of the first trailer this coming Sunday (24th January). We're digging the colour scheme, off-setting cool blues and angry, rage-fuelled reds.

No doubt this teases an eye-popping feast to come, and the cast is equally attention-grabbing. Stranger Things' Millie Bobby Brown returns from King of the Monsters, as do Kyle Chandler (also known for movies such as The Wolf of Wall Street) and Zhang Ziyi (Crouching Tiger, Hidden Dragon). Newcomers to the franchise include The Legend of Tarzan's Alexander Skarsgard, Iron Man 3's Rebecca Hall and Deadpool 2's Julian Dennison.

The official Warner Bros synopsis is as follows: "In a time when monsters walk the Earth, humanity's fight for its future sets Godzilla and Kong on a collision course that will see the two most powerful forces of nature on the planet collide in a spectacular battle for the ages. As Monarch embarks on a perilous mission into uncharted terrain and unearths clues to the Titans' origins, a human conspiracy threatens to wipe the creatures, both good and bad, from the face of the earth forever."

Wingard is promising a nostalgic blast for fans of both monsters. In 2017, he told Screencrush: "I really want you to take those characters seriously. I want you to be emotionally invested, not just in the human characters, but actually in the monsters. It’s a massive monster brawl movie. There’s lots of monsters going crazy on each other, but at the end of the day I want there to be an emotional drive to it. I want you to be emotionally invested in them. I think that’s what’s going to make it really cool."

Godzilla vs Kong is scheduled for release (at the time of writing) on 21st May 2021. Excited? Let us know @Cineworld. And in the meantime, check out our list of the scariest movie monsters. 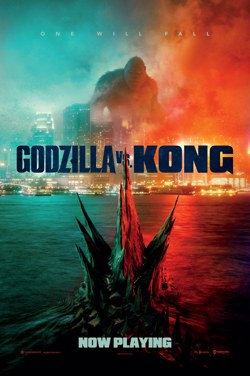