Ghostbusters: Afterlife has conjured a spooktacular $60 million at the global box office, and has also left us with plenty of questions as to its post-credits reveal. Here's our breakdown as to what this means and what it could portend for a Ghostbustiverse...

What happens at the end of Ghostbusters: Afterlife?

The two generations of Ghostbusters manage to defeat Gozer for good, in the process restoring schoolteacher Mr. Grooberson (Paul Rudd) to his human state, after he was transformed into a Zuul terror dog. The ghost of Phoebe and Trevor's grandfather, Egon Spengler (a CGI manifestation of the late Harold Ramis) then materialises to say goodbye to his daughter, Callie Spengler (Carrie Coon), making amends for years of bitter acrimony.

Who are the characters in the Ghostbusters mid-credits scene?

That would be Venkman and his old flame, Dana Barrett (Sigourney Weaver), whose haunting propelled the plot of the original 1984 Ghostbusters movie. She taunts him with electric shocks while attempting to get him to read cards – this is a throwback to his (decidedly lecherous) behaviour in the first movie, as he used the card reveal to try and score dates with college girls. Whether Venkman and Dana are still together at the close of Afterlife remains ambiguous, although they clearly still enjoy each other's company.

Who are the characters present in the Ghostbusters: Afterlife post-credits scene?

These would be the aforementioned Winston and Janine Melnitz (Annie Potts), the original Ghostbusters secretary. The latter had appeared earlier in the movie, warning Callie about the legacy of the supposedly deranged 'dirt farmer', subsequently revealed to be Egon. By the way, the precursor to this moment, involving Janine handing Egon her lucky coin from the 1964 World's Fair, is a deleted scene from the 1984 movie.

Where does the Ghostbusters: Afterlife post-credits scene take place?

That would be the Hook and Ladder New York firehouse that acted as the Ghostbusters place of operations, as well as Ecto-1's original home, in the 1984 and 1989 movies. Film fans can check out the location (it's actually a fire station in real life) at 14 North Moore Street at its intersection with Varick Street in the Tribeca neighborhood of Manhattan.

What does the flashing red light mean?

In the original Ghostbusters movie, the team trapped spirits and stored them in a high-voltage containment system. This was then foolishly shut down by snooping EPA official Walter Peck (William Atherton), resulting in a host of spooks that invaded Manhattan. For some reason, in the Afterlife post-credits scene, the containment system has been moved above ground – but the flashing red light indicates, as before, that something is wrong with the system. It's a neat way of calling back to the original movie while leaving us hungry for more.

Why is Winston's presence significant?

As a key member of the original Ghostbusters contingent, it's nostalgically pleasing to see Ernie Hudson's character placed front and centre. The actor was always sore about how the character was marginalised in the first two movies (criticisms that do hold water), and Afterlife attempts to flesh out more of a character arc for Winston.

Earlier in the movie, Stanz told Phoebe via a phone call that Winston had become a successful businessman. With the break-up of the original Ghostbusters team and the death of Egon, the original headquarters was then sold. In the post-credits scene, we see that Winston has purchased the building, which may imply that it's going to become a base of operations in a future Ghostbusters film.

Winston has already explained his initiatives and motives to Janine: "I wanted to be an example of what’s possible," adding: "I may be a businessman, but I will always be a Ghostbuster." It's an effective, affectionate way of investing a smidgen more pathos in a neglected character.

Does this imply that we're getting a new Ghostbusters series?

It's hard to say at this stage. Afterlife director Jason Reitman makes it explicit that he's handing the baton (or, rather, the proton pack) from one generation to another. Whether we'll see the older Phoebe, Trevor, Podcast and Lucky operating from New York as a new, professional Ghostbusters squad remains to be seen. The subsidiary of Columbia Pictures known as Ghost Corps has been tasked with handling the Ghostbusters franchise, so maybe there will be some sort of expansion in the years to come.

What have the filmmakers said about future Ghostbusters movies?

"We have lots of ideas about how this story can develop," co-writer Gil Kenan told GameSpot. "We are so excited by Trevor, Phoebe, Lucky, and Podcast. We feel like we really know their characters, and we've seen audiences start to fall in love with them. There are lots of surprising ways that the future and the past can grow together, side-by-side and separately. And we've had long conversations about how that can happen.

"But we're totally excited by the fact that by the end of Ghostbusters: Afterlife, audiences are invested in a new set of characters as worthy companions to the pantheon of ghostbusting."

Jason Reitman told The Hollywood Reporter: "We wanted to make a movie that opened the universe to all kinds of stories. I want to see Ghostbusters movies from all of my favorite directors and I hope this movie sets the table for them."

So, will we be seeing something strange in our neighbourhood in the not-too-distant future? Let's hope so.

Where can we book Cineworld tickets for Ghostbusters: Afterlife?

Click here to book your tickets for Ghostbusters: Afterlife. Don't forget to tweet us your reactions to the movie @Cineworld. 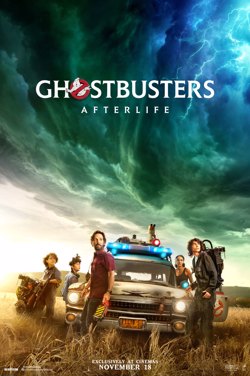