Ryan Reynolds stars in the action-packed and warm-hearted new adventure Free Guy. He plays an ordinary Joe named guy who steadily awakens to the realization that he's a simulation in a video game. The movie screened in advance for Cineworlders (check out the Secret Screening responses) and is released in Cineworld cinemas on 13th August.

In the spirit of gaming, we're encouraging all you Free Guy fans to level up and choose from one of several dynamic viewing formats. Scroll down to find out more.

Thanks to IMAX remastering, your favourite blockbuster movies are not simply bigger; they envelop you in a glistening frame-by-frame restoration. IMAX brings added warmth and sharpness, and Free Guy is tailor-made for this format. Reynolds' NPC (non-player-character) Guy exists in a world where rules are made to be broken, and IMAX promises to immerse you in his enjoyably anarchic world, particularly when he becomes tuned into the fact that it all seems a bit unreal...

Exclusive to Cineworld in the UK and Ireland and rapidly expanding since its launch in 2015, 4DX adds extreme sensory thrills to your cinema experience. With stimulating effects like water, wind, scent and strobe lighting that are timed to enhance what’s happening on screen, you’ll be truly thrilled in your seat.

And speaking of your seat – it moves. The high-tech motion programming means it moves in time with the film’s action, and along with vibrations and shaking, you’ll feel like you’re part of Free Guy's visceral yet good-natured popcorn thrills.

Expand the horizons of your Free Guy cinema experience with Superscreen. The breathtaking multidimensional sound powered by epic Dolby Atmos speakers will make you feel like you’re right there in the film. This combined with state-of-the-art projection on our huge screens means every second is a beauty to behold – from picturesque scenery to high-action sequences.

Click here to book your tickets for Free Guy, releasing in Cineworld on 13th August. 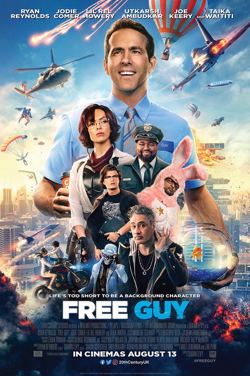