5 reasons why we can't wait to see Space Jam: A New Legacy Back in 1996, Warner Bros scored a slam-dunk with the all-action basketball blockbuster Space Jam, a movie that teamed one of the world's biggest sports stars, Michael Jordan, with some of the world's best-known animated characters – including Bugs Bunny and Daffy Duck. As well as being oodles of fun, Space Jam grossed a whopping $250 million worlwide, so why wouldn't the studio want to rekindle the franchise for a new generation?

And so, here we are 25 years on, eagerly anticipating the release of Space Jam: A New Legacy, a film that dribbles, dodges and leaps its way into Cineworld cinemas on Friday 16th July. This time around, LA Lakers star LeBron James is the basketball hero teaming up with a cast of cute and loveable toon stars in a movie that cost a cool $150 million to make. But why should you see it? Well, there are several compelling reasons, actually – step this way to find out more...

Space Jam: A New Legacy sees LeBron James (as himself) diving headlong into a virtual world as he tries to rescue his youngest son from the clutches of an evil A.I. villain (played with unerring menace by Academy Award winner Don Cheadle). To complete his daring mission, LeBron must put together a rag-tag team of animated characters in an attempt to defeat the virtual world's imperious basketball champions. In scenes that echo the 2004 comedy Dodgeball: A True Underdog Story, cuteness and mayhem ensue as the Loony Tunes lock horns with this seemingly insurmountable foe.

2. Director Malcolm D. Lee made one of our favourite comedy films

The new Space Jam film is directed by Malcolm D. Lee. He's not exactly a household name, but he was responsible for making one of the most enjoyable comedies of recent years – Girls Trip. In case you haven't seen it, the film stars Regina Hall, Queen Latifah, Tiffany Haddish and Tracy Oliver as four old friends who reconnect on a road trip to a New Orleans music festival. As well as picking up multiple awards, it was lauded by most critics. Mike Reyes, writing for CinemaBlend, commented: “There is a genuine sense of friendship, and comedy throughout, that make the film one of this summer's most surprising comedies.”

Like Tiger Woods, Roger Federer and Lionel Messi, LeBron James is one of those athletes who transcend the sport that made them famous. One of the best NBA players ever – and frequently compared with his Space Jam predecessor Michael Jordan – the US-born star is now very much a global icon. He's presented Saturday Night Live, he owns part of Liverpool FC and, in 2008, he became the first black man ever to appear on the front cover of Vogue. But what's he like on the big screen? According to News.com, more impressive than the global icon who appeared in the orginal Space Jam movie. Commented writer Wenlei Ma: "James is a more charismatic and committed screen presence than Jordan."

4. The rest of the cast is pretty awesome, too!

In films like this, where real-life actors star opposite animated characters, it's easy to forget that those toons are voiced by actual people – and Space Jam: A New Legacy features some real talent behind the microphones. As well as Don Cheadle, the cast includes Zendaya as Lola Bunny, Star Trek: Discovery star Sonequa Martin-Green as the animated version of LeBron's wife Kamiyah, not to mention all the usual, very talented suspects who voice Warner Bros stalwarts such as Bugs Bunny, Porky Pig and Tweety.

5. You don't have to love basketball to enjoy it

“But I'm not really a fan of basketball!” we hear you cry. Honestly, Space Jam: A New Legacy is so much more than just a basketball film. It's fast-paced, it's full of physical comedy that'll appeal to both children and adults, and its CGI/animation really pops off the screen. What's more, the movie has been dubbed a 'standalone sequel', meaning it won't matter if you haven't seen the 1996 original. So, what are you waiting for?

Space Jam: A New Legacy will be showing at Cineworld cinemas from Friday 16th July. To book your tickets, click here.

What other sports stars would you like to see making the transition to the silver screen? Let us know @cineworld. 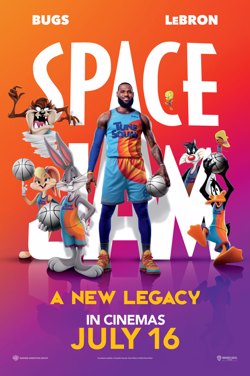