The Fremen of the upcoming sci-fi spectacular Dune are used to scouring the sands of Arrakis for 'wormsign', the telltale indications of the monstrous sandworms. And film pundits have been anxiously scanning the horizon in their own way, wondering how well the movie will perform at the box office.

The initial omens are good. Denis Villeneuve's lavishly staged adaptation of Frank Herberts' novel (or, more specifically, the first half of it) has opened in selected international territories to the tune of $37 million. This has outstripped initial opening expectations of $20 million. The financial success of this first Dune instalment will dictate the likelihood of the second film being made. The sequel hasn't even started shooting yet, and to get just 50% of Herbert's story would be crushing.

Dune's initial box office has come from just 24 territories, reports Deadline. In other promising news, Deadline states that Dune "is tracking 4% ahead of Tenet, 33% ahead of Black Widow, 52% ahead of Blade Runner 2049, 58% above Shang-Chi And The Legend Of The Ten Rings and 80% ahead of Godzilla Vs Kong". Several of the blockbuster releases cited there have been released in the shadow of COVID-19, so if Dune can defy pandemic expectations, then it will go some way to restoring theatrical confidence.

Deadline also says that "IMAX delivered a fantastic $3.6M from 142 screens representing roughly 10% of the total weekend and a $25K per-screen average". This will be a critical market for Villeneuve's movie: such is its breathtaking sense of scale that the director is encouraging viewers to make the leap and experience the film in the biggest, most immersive manner possible.

Here in the UK, we have to express a bit more patience before the film arrives on 21st October. Dune assembles a constellation of terrific actors to bring us the complex story of Arrakis, the desert planet that harbours the invaluable substance known as spice, and which is used to power interstellar travel. At the centre of the tale is a complex dynastic struggle between two rival families: the Atreides clan who have been granted stewardship of Arrakis, and the vengeful Harkonnens.

Prospective Atreides heir Paul (Timotheé Chalamet) is forced to flee into the desert after the Harkonnens launch an insurgent attack on his family. He feels compelled to live up to his father, Duke Leto (Oscar Isaac), but must instead seek his own survival with his mother, Lady Jessica (Rebecca Ferguson), a 'bene gesserit' or seer, whose collective has been experimenting with royal bloodlines to bring about the arrival of a new messiah.

Dune is released in Cineworld cinemas on 21st October. Will you be taking the journey to Arrakis in IMAX? Let us know @Cineworld. 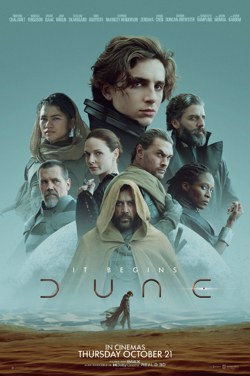