February is set to bring with it a host of exciting Cineworld movie releases. From epic blockbusters to must-see family treats, here's everything headed your way this month.

Margot Robbie finally gets to hog the limelight as the anarchic Harley Quinn in this DC comic book thriller. The outwardly exuberant yet inwardly unpredictable Quinn leads her own flock of crime fighters and vigilantes, as they bring justice to the door of the evil Black Mask (Ewan McGregor). Director Cathy Yan strikes a blow for equality behind the camera, becoming the latest female director to helm a popcorn blockbuster. (Other examples this year include Cate Shortland with Black Widow and Chloe Zhao with Eternals.)

Kristen Stewart is submerged in claustrophobic terror in this story of danger beneath the surface. When a submerged research facility is invaded by a mysterious creature, the operations team, led by the resourceful Stewart, must band together in order to survive.

South Korean director Bong Joon-ho is one of the most exciting directors working in cinema at the moment. His previous movies, which include Memories of Murder, The Host and Snowpiercer, are bracingly unpredictable exercises in tone, mixing black comedy and moments of shock with potent social satire. All of those characteristics are present and correct in the Oscar-nominated Parasite, which has been acclaimed as the director's masterpiece. It's the story of a poor family who stealthily invade the lives of their wealthier counterparts – with drastic consequences.

One might expect Robert Downey Jr. to rest on his laurels, now that he's finished as Iron Man. But no: he adopts a Welsh accent and a menagerie of CGI animals in this update of the 1967 Rex Harrison classic, with the all-star voice cast including Emma Thompson and Rami Malek.

Jane Austen's classic 1815 novel Emma has been adapted for the big screen before, most famously in 1996 with Gwyneth Paltrow in the lead role. Now, it's the turn of The Witch star Anya Taylor-Joy to put her own spin on Austen's mischievous matchmaker, a Regency-era busybody who is too blind to the imperfections of her own life. Johnny Flynn, Mia Goth, Miranda Hart, Bill Nighy and Callum Turner co-star, and Autumn de Wilde directs.

Jumanji aside, we're still waiting for a truly great video game movie. Will the new take on Sonic be it? Following last year's criticisms, the movie iteration of the Sega icon has been extensively redesigned, and he's now ready to run rings around the competition. Playing his feared nemesis, Doctor Robotnik: the reliably manic Jim Carrey.

7. The Call of the Wild (released 19th February)

Jack London's 1903 story The Call of the Wild is a masterpiece of literature, the sweeping story of a domesticated dog who reverts to his primal roots when he's kidnapped and sold to an Alaskan sled-hauling company. The new big-screen adaptation comes from Blue Sky Studios, responsible for the likes of Rio and Ice Age. And our canine hero Buck is brought to life via the wonders of CGI motion capture, with Harrison Ford providing grizzled flesh and blood counterbalance as Buck's new owner.

Steve Coogan and director Michael Winterbottom are a dynamite team, having previously collaborated on the likes of 24 Hour Party People and The Trip. They're now back together for this scabrous social satire, in which Coogan's sickeningly rich tycoon Sir Richard McCreadie comes under the spotlight for his bullying working practices. Expect to both wince and nod your head vigorously in agreement.

Bridesmaids' Rose Byrne and Girl Trip's Tiffany Haddish are an enterprising duo in this raucous comedy. They play two business owners who get in hot water when agreeing to a business deal with Salma Hayek's voluptuous rival – expect madness to ensue.

Fresh from his appearance as Hulk in Avengers: Endgame, actor Mark Ruffalo now turns to the altogether more serious issue of environmental pollution. Carol director Todd Haynes adapts the shocking true story of a chemical company that systematically and knowingly poisoned the residents of a local town, with Ruffalo tapping into his Spotlight sense of righteousness as the investigating lawyer.

H.G. Wells' classic novel of scientific meddling was famously filmed in 1933, starring Claude Rains. The 21st-century movie update puts a clever spin on things: what if our hero was instead an abused wife, and the invisible man the one who had previously tormented her? The Handmaid's Tale's Elisabeth Moss takes on another empowering role in this latest thriller from horror stable Blumhouse (Get Out).

Director Ruben Ostlund's tar-black 2015 comedy Force Majeure gets the Hollywood treatment from The Way, Way Back directors Nat Faxon and Jim Rash. Will Ferrell and Julia Louis-Dreyfus are the married couple on a skiing holiday, whose relationship splinters during a moment of avalanche-induced panic.

How many of these movies are you planning to see in Cineworld? Let us know @Cineworld. 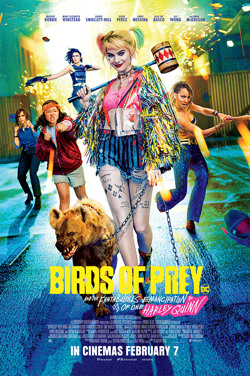