Home Blog list page Candyman: everything you need to know Before we get stuck into the new movie, let's explore how the very first Candyman film originally got its hooks into us...

1. The original Candyman was based on a Clive Barker short story

Released in 1992 and directed by British filmmaker Bernard Rose, Candyman was based on short story 'The Forbidden'. It was written by author Clive Barker (whose blood-curdling Hellraiser also inspired a hit horror series), and featured in his collection Books of Blood.

Barker's original tale dealt with deprivation and the British class system, as filtered through the environment of Toxteth in Liverpool. There, rumours of the hook-handed serial killer Candyman begin to circulate.

Rose, however, expanded on the legend and, arguably, took it to even greater heights. He took the sinister story across the Atlantic to Chicago, using Barker's text as a vessel through which to explore American attitudes towards race and sexuality. The main environment of the movie is the Cabrini-Green housing project in the middle of the city, which at the time of the film's release was a notoriously deprived and gang-ridden area, although it's since been gentrified.

The filmmakers shot on location in Cabrini-Green, having worked out arrangements with local gang members, and accompanied at all times by plainclothes police officers. This impoverished atmosphere gives Candyman a real sense of authenticity, and the movie also broke new ground in its opening aerial shot. It's an eerie birds-eye view of Chicago, gliding along in the manner of a demonic presence watching from above, accomplished by a then-groundbreaking piece of equipment called a Skycam. When glimpsed in conjunction with Phillip Glass's brilliantly creepy score, mixing rich organ arrangements with choral lamentations, it isn't easily forgotten.

Candyman was revolutionary for showcasing a black horror icon – and taking him seriously in the process. Throughout the history of horror cinema, black characters were often exaggerated to satirical or even detrimental effect – think Blaxploitation film Blacula, as an example.

However, Candyman grafts potent social subtext to its scenes of gore and bloodshed. The fact that Candyman is a figure to be feared, and also black, goes right to the heart of unease in America; this is something Jordan Peele would himself explore in his Oscar-winning Get Out. What greater boogeyman than one who can expose, and embody, the entirety of America's queasy racial divides, and its notorious Civil War history?

This extends to the film's burgeoning relationship between Candyman and his eventual victim Helen Lyle, played by Virginia Madsen. Helen is a grad student doing a thesis on urban legends, and when she ventures to Cabrini-Green to investigate Candyman's legend further, she brings undead evil down upon her head. Eventually, she is killed in a conflagration by the Cabrini-Green residents, and becomes an extension of the Candyman legend, returning to kill her philandering husband (Xander Berkeley) after he makes the mistake of saying Helen's name five times into the mirror.

Candyman's connection with Helen, stating "be my victim", appears to be a reflection of the interracial love story that led to his demise in the 19th century. Miscegenation (love between an interracial couple) is a key theme of the movie: Candyman, born Daniel Robataille, was born the son of a slave, and grew up in polite society to establish a reputation as a painter. However, he made the mistake of falling in love with a white landowner's daughter, getting her pregnant and suffering a horrific fate. A vicious mob sawed off his hand (resulting in his bloody stump with a hook) and smeared him with honey, leading him to be stung to death. We see the whole ghastly ordeal in 1995 sequel Farewell To The Flesh.

Little wonder Candyman has emerged as a modern classic of horror. Although it dwells in the supernatural, the real horror resides in the depravity and weakness of human nature. It's a reflection of the insidious nature of racism, and also the folly of human curiosity. Helen simply can't leave well enough alone, and deeper than that, appears to showcase a blase, flippant attitude towards Candyman's legend before he manifests in front of her. By initially refusing to take the tale seriously, and by casually exploiting her status as a relatively privileged white woman (tellingly, her lavish apartment looks out over the city, towering above the location of Cabrini-Green's residents), she ultimately pays the price.

Remarkably, the role of Candyman was originally pigeonholed for Eddie Murphy, who allegedly was turned down because his salary was too high. But it's impossible to imagine the movie without the presence of six foot five, classically trained actor Tony Todd, whose basso voice and towering height creates one of the most intimidating characters in horror history.

The genius of Todd's portrayal is in how seductive the character of Candyman is. Like all great horror movie icons, Candyman is a reflection of how the dark side can get under our skin and cast its own kind of alluring spell. There's also a deeper sense of tragedy beyond Candyman's immediate backstory; as Todd portrays him, the character appears to relish his status as the black boogeyman whom everyone seems to fear.

He covets this position, attaining the status that was denied him in his past life. As Candyman says: "I am the writing on the wall, the whisper in the classroom. Without these things, I am nothing." Yet, tragically, Candyman had no say in his destiny; this role was not one that he sought for himself, but one that was imposed on him by brutal white slavers. Little wonder that Todd considered the role his personal equivalent of The Phantom of the Opera – there's a definite air of doomed romanticism flowing through the Candyman character, despite his hook-handed carnage.

That said, acting as the character wasn't easy, particularly in the scenes involving bees. Todd managed to work an arrangement where he was paid $1000 per sting; he ended up being stung 26 times. In the scene where Candyman's mouth is filled with the insects, Todd had to wear a dental dam in order to prevent them from going down his throat. Newly born bees with less potent stingers were used in the scene, although Madsen (who was hypnotised in certain scenes) was understandably anxious.

4. There have already been two sequels in the series

Released in 1995, Candyman 2: Farewell To The Flesh was directed by Bill Condon, later of Gods and Monsters and Beauty and the Beast fame. It relocates to New Orleans, and in all honesty, is pretty terrible, substituting the original movie's creepy atmosphere for endless jump scares and reams of bad acting. However, the moment where we eventually get to see Candyman's appalling demise is very well acted by Todd – better, in fact, than the film deserves.

In 1999, the third movie, Candyman: Day of the Dead, was released. Todd again reprised his portrayal of the titular figure, who this time attempts to lure one of his descendants over to the other side. Suffice to say, critics stung the movie with appalling reviews and the series appeared dead in the ground – until now...

5. The new Candyman is another sequel, not a remake

Peele is billing the new Candyman movie as a "spiritual sequel", although he only produces and co-writes. Directing duties fall to Top Boy's Nia DaCosta, who brings us the next chilling chapter in the blood-soaked saga.

Watchmen and Aquaman actor Yahya Abdul-Mateen II plays Anthony, an artist whose interpretation of the Candyman legend summons unspeakable evil. The twist is Anthony featured in the original movie: he was the baby Candyman attempted to sacrifice on the Cabrini-Green bonfire at the end of the film. When Helen rescued Anthony, she died in the process, becoming her own murderous legend.

The new movie returns to Cabrini-Green, now gentrified but still haunted by the legend of Candyman. The notion of legacy rears its head in the trailer when we hear Destiny's Child's 'Say My Name' remixed with Phillip Glass' original theme 'It Was Always You Helen' – and repeated five times.

Interestingly, it appears this Candyman is an extension of Anthony's own personality, as seen in the trailer when he catches himself in the mirror with a hook for a hand. That said, Tony Todd is credited as appearing in the movie, along with the original movie's Vanessa Estelle Williams who plays Anthony's mother, Anne-Marie.

If Beale Street Could Talk actor Teyonah Parris plays Anthony's girlfriend Brianna, and, somewhat confusingly, there's a credited appearance from Cassie Kramer as Helen Lyle. What gives? No doubt we'll find out in due course when Candyman is released on the 12th of June.

Candyman is released in Cineworld cinemas on 27th August. Planning to watch Candyman on the big screen? Let us know @Cineworld. 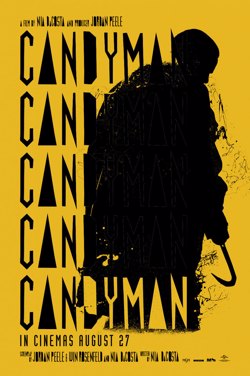