The last year has been one of relentless uncertainty, so it feels refreshing to be able to report some cast-iron good news from the world of cinema. A Quiet Place: Part II, the sequel to 2018 horror hit A Quiet Place, has blitzed pandemic box office expectations, opening to $70.4 million worldwide, reports Deadline. That means the film's box office takings have already exceeded its $61 million budget. (Movies must, at the very least, double their budgets to qualify as a baseline success.)

It's a stirring reminder that immersive, well-acted big-screen entertainment still has the power to draw in the crowds, even in the midst of challenging circumstances. Of course, the film was well-positioned to capitalize on the barnstorming success of its predecessor, which took $340 million worldwide against a $17 million budget. The heritage of the original film appears to have acted as a significant lure for audiences, expanding the lore of the series and taking the characters in new directions.

John Krasinski is back as director for this spooky sequel in which the beleaguered Abbot family must leave their home and seek out other survivors. Along the way, they must contend with the expected onslaught of sound-sensitive aliens and a whole host of other challenges.  As before, Emily Blunt leads with Millicent Simmonds and Noah Jupe co-starring. Cillian Murphy and Djimon Hounsou are two new additions to the ranks.

Click here to book your tickets for A Quiet Place: Part II, opening in Cineworld cinemas on the 3rd of June. Don't forget to check out the Unlimited screening reactions to the movie. 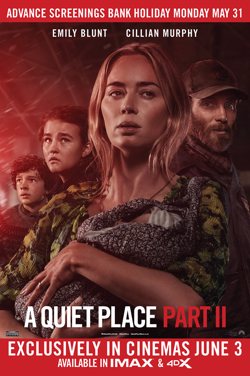 The Batman busts the box office with second-biggest pandemic debut