Home Cineworld Blog Where in the world is Tom Hanks? #Inferno

Where in the world is Tom Hanks? #Inferno

It has been a decade since we first saw Tom Hanks play brainiac hero Robert Langdon on the big screen in The Da Vinci Code, and again in 2009's Angels and Demons, but this October he's back in new Dan Brown thriller Inferno.

In the latest instalment of the blockbuster mystery series, Robert is not only faced with being the target of a manhunt, but he has no recollection of his last few days. Along with the help of Dr. Sienna Brooks (Felicity Jones), Professor Langdon must use his knowledge of symbology to solve the ‘Inferno’ mystery…. visiting many exotic places over Europe while he’s at it.

Though it sounds like a tough job, at least Tom Hanks gets to see some beautiful sights while playing the intelligent, problem-solving professor. So where will Robert Langdon be jetting off to in Inferno? Here is a little list of places we think he may be heading to.

Where is it? Florence, Italy

The lowdown: The majority of Inferno is set in Italy, specifically the idyllic Florence, and one of the places key to the Inferno storyline is Florence town hall, the Palazzo Vecchio.

With courtyards and many different floors filled to the brim with famous artefacts, it's the perfect location for a movie like Inferno that delves deep into Renaissance history. The entrance hall use to hold Michelangelo’s David between the years 1504 and 1873, but after David moved to the Academia Gallery a replica has since stood by the entrance.

Being the town hall, Palazzo Vecchio is a popular tourist destination as well as a place for local residents to visit. Therefore there is an array of different types of people coming to view the beauty, art and culture Florence has to offer. Will the Palazzo Vecchio or Michelangelo’s David be helpful to Robert and Sienna?

How to get there: Flights are available from a tiddly £59 each way from London City Airport. Either that, or can jet to local Pisa from London or Gatwick, and train it the remainder of the way through the beautiful Tuscan countryside. 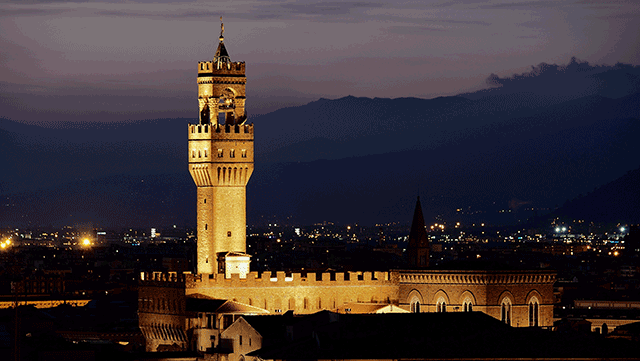 Where is it? Florence, Italy

The lowdown: Another gorgeous location Robert Langdon will be visiting – or at least passing through – is the Ponte Vecchio- a medieval stone bridge (with a picturesque arch!).

The bridge is famous for its rich history of jewellers and art dealers, which sounds like just the type of place Robert’s mysteries take him. Sitting over the Arno River, the bridge seems like the perfect place for a possible quick getaway via a boat, or even a chase scene among the traders – not a situation that's unusual to Robert!

For the hopeless romantics out there, the Ponte Vecchio is a favourite location for couples to lock their own padlocks to signify their love . So if it so happens that the bridge or the Arno River are not on Robert Langdon’s list of locations to solve the Inferno mystery, maybe love is in the air?

How to get there: Assuming you've either trained it or flown from the UK, once you're in the city, point yourselves away from the Palazzo Vecchio, walk past the world-renowned Uffizi Gallery towards the Arno and you can't miss it.

Where is it? Padua, Italy

The lowdown: A busy train station is always good for ramping up suspenseful thrills – after all, who knows who might be watching? With commuters connecting to Verona and Venice, tourists take in the sights before they catch a train to Rome and Milan.

We're thinking this is exactly the type of location Robert Langdon will either be chased or do some chasing. Not only this, but the connections to some of the biggest and prettiest cities in Italy are only a quick train ride away. So if by any chance something major disrupts professor Langdon on his quest and he needs to get somewhere quick, what better way to run away than by catching a train?

How to get there: All the major airlines including British Airways and Easyjet fly to Venice Marco Polo Airport. From there, you can hop on the hour-long bus service. Where is it? Venice, Italy

The lowdown: If train transportation is not the swift route Robert wants to take, he might be using a boat within the stunning Grand Canal in Venice.

The canal is shaped like the letter ‘S’ and the majority of the traffic is boats, ferries, water taxis and gondolas. Along the canal are over 150 buildings which were built between the thirteenth and eighteenth centuries, architecture that displays lots of important Italian history.

This scenic, romantic location is hugely popular in the movies: don't forget James Bond himself visited here with Vesper Lynd in 2006's Casino Royale. The Grand Canal has attracted its fair share of real-life, intelligent, literary heroes over the centuries so Robert Langdon is ideally suited to do a bit of investigating – or chasing – whilst in the area!

How to get there: Fly to Venice Marco Polo from London Heathrow, train it to the city centre and then grab a water taxi to take in the glorious sights.

Where is it? Istanbul, Turkey

The lowdown: Away from Italy this time, but to another famous city: Istanbul. Hidden from tourists outside is the Basilica Cistern, a large water tank with a very interesting, slightly scary, feature.

The two Medusa heads at the bottom of two columns have a fascinating past because no one knows where they came from! Will this be important for the events of Inferno? Not only is the cistern underground, but it is surrounded by water making it a tense and chilling location to be if you are possibly being hunted.

Good thing Robert Langdon has two films worth of experience when it comes to solving mysteries and finding bad guys!

How to get there: Turkish Airlines from Birmingham, Edinburgh, Gatwick, Heathrow, Manchester and Stansted or British Airways from Heathrow. A three and a half hour journey will get you to the city.

Where is it: Istanbul, Turkey

The lowdown: Converted to a church, a mosque and now museum, the Hagia Sophia is an iconic building in Istanbul.

Famous for its huge dome in the centre of the structure and for once being the world’s largest cathedral (until 1520), it's no wonder that the events of Inferno somehow lure Robert Langdon to the Hagia Sophia.

The museum is full of culture with galleries, columns, mosaics, marble doors and famous burials, so how this astonishing place links with artistic and intriguing symbolism from the mind of Dan Brown will make for an exciting adventure.

How to get there: Once again, a short flight from London or Birmingham will get you there. Planning to jet off to these Inferno locations for your next holiday? Share your getaway plans with us @Cineworld. The movie is released in Cineworld on 18th October. Why this October’s Tom Hanks thrill-ride Inferno will keep you on the edge of your seat!